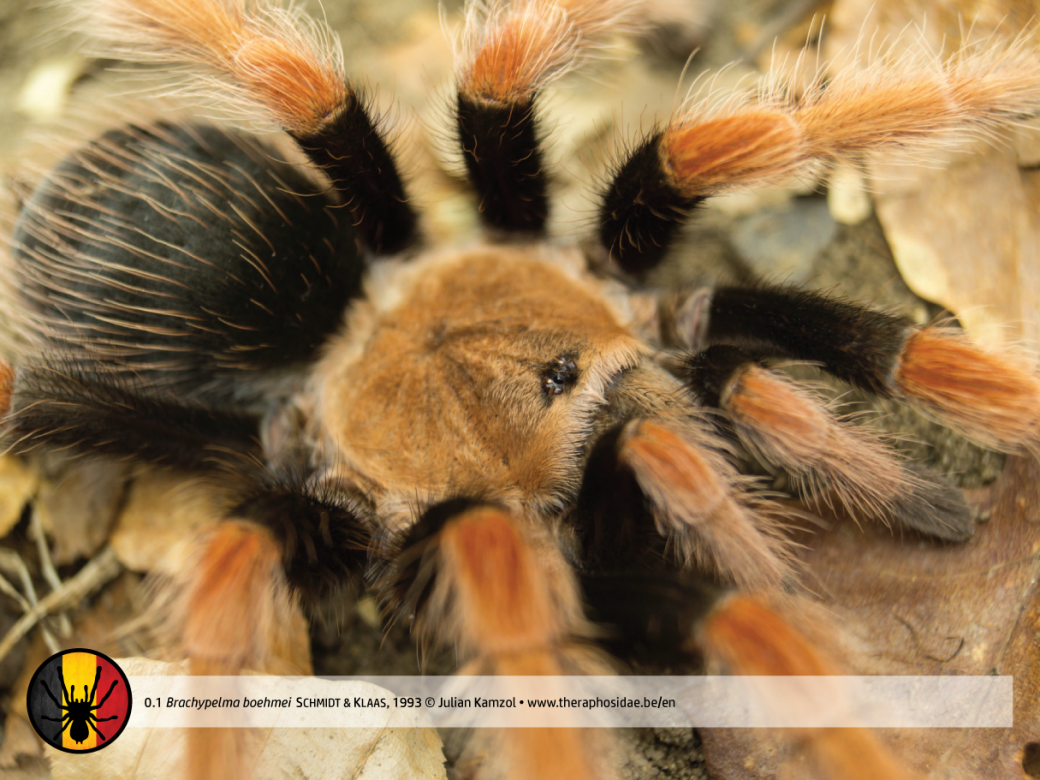 Behavior: Nervous. The spider will try to flee at first. Persistent provocation can, and probably will result in use of urticating setae. In order to detect their prey easily, they’ll create an almost invisible and tangled web on the surface at the entrance of their burrow. The Brachypelma-genus possesses beautiful colors, not hiding them at all. They’re out most of the time, waiting for unexpecting prey to pass.

Life expectancy: Females become up to 20-25 years old. Males are given a shorter lifetime of 7-8 years. Exceptions get 9-10 years old, which is very old for a male tarantula. Nevertheless most males die within 2 years after making their spermweb.

Brachypelma boehmei is native Mexico en Belize, along the Pacific Coast in western Guerrero State, living in dry scrublands. It is subtropical warm and rather dry except for 4 months. Temperatures almost daily reach levels up to 27°C, with maxima around 30°C. Please be informed of the fact the spider will protect itself against the sun underneath tree trunks, branches, leaves, abandoned burrows and rocks. Do not overheat the terrarium

Smaller than adult: Min. 3x span width in surface. You’ll see the spider crawling around plenty of times, even on the glass.

* Make sure there’s nothing sharp in the terrarium.

Warmest month: April. In general, temperatures are rather high.

With a little experience, breeding a  Brachypelma boehmei is not that difficult. The females are exacting, as you’ll need to simulate both winter (6-8 weeks (no food)) and spring (3-4 months (lots of food)). Let the terrarium dry out, but keep substrate slightly moist, because the female doesn’t like a humid environment close to her posterity.

• Systematically increase temperatures (25-29°C) and moisten substrate (70-75%) once after winter. Make sure there are no puddles inside the terrarium. Keep temperatures perfect, as you triggered the female to start making her cocoon 60-90 days after mating.

• From the moment the female is visible at the entrance of her burrow, you might expect 300-1000 spiderlings to come out 8-10 weeks later. Deprive the cocoon, when desired, 7 weeks after you’ve seen her protecting the cocoon. Store the eggs at a humidity of 65-70% and a temperature of 26-29°C.

• Megaphobema mesomelas was part of the Brachypelma-genus until 1991? She was removed to the Megaphobema-genus due to its shorter hairs and longer carapace.

• Very beautiful webpage about B. boehmei, made by E. Hijmensen.