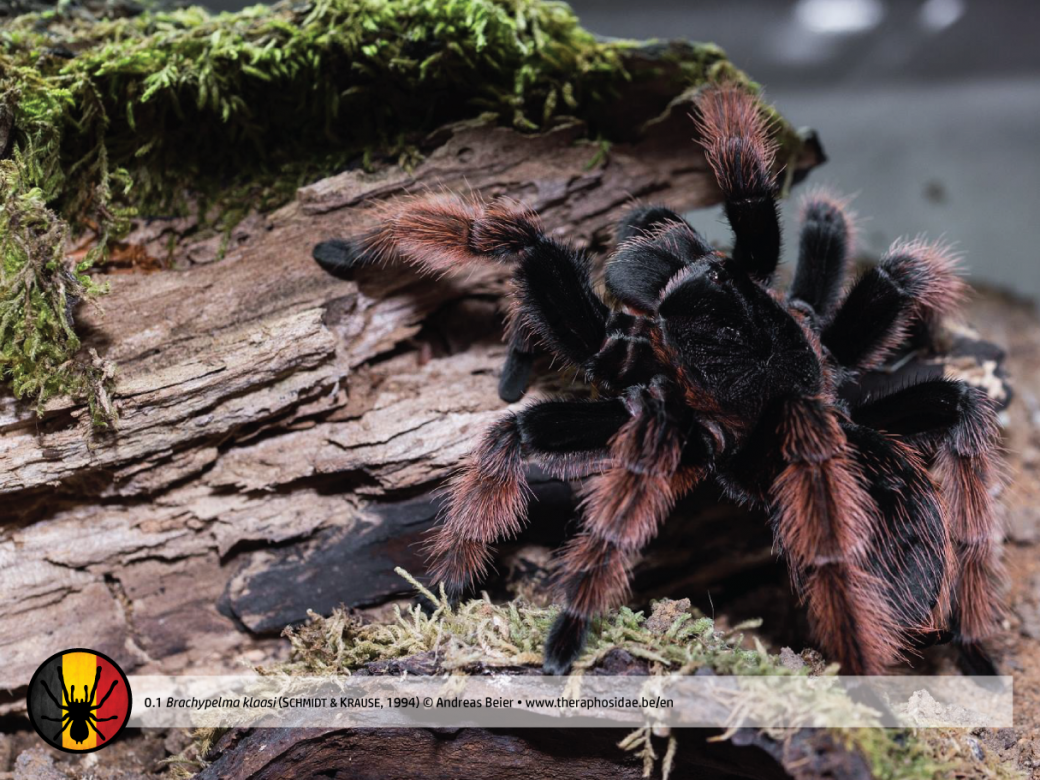 Brachypelma klaasi (Schmidt & Krause, 1994), also known as “Mexican pink beauty”, is a stunning and rather rare Brachypelma sp. from Mexico. Although you might think different, the bright coloration on patella, tibia and metatarsi provides perfect camouflage in their natural habitat. Don’t confuse the spider with Brachypelma boehmei, as she mainly differs from the species in the dark coloration of the carapace and the pink hue on the legs. Due to slow growth, habitat degration and illegal smuggle, Brachypelma klaasi is considered to be one of the most endangered species from the Brachypelma-genus. An estimated 0,1% Brachypelma klaasi makes it in the wild to adulthood (source). In order to save the species, please don’t buy wild caught Brachypelma klaasi, but get them from successful breeders.

Origin: Mexico (range extends from Tepic, Nayarit, in the north to Chamela, Jalisco, in the South. Largest populations are being found at the biological reserve at Chamela (Arnett/1986).

Body length: ≤ 5/7cm. Brachypelma klaasi is sexually dimorphic, with females being larger and heavier than males.

Behavior: Brachypelma spp., in general, are considered to be docile, but Brachypelma klaasi is rather nervous, mostly active in the early morning and early evening. Persistent provocation, however, can (and probably will) result in use of urticating setae. In order to detect their prey easily, they’ll create an almost invisible and tangled web on the surface at the entrance of their burrow. Nevertheless they’ll go actively on a hunt in the surrounding vegetation as well. Remarkably the spider creates a burrow with two chambers in the wild. The first chamber is built on surface level, connected to a second chamber at app. 15cm underneath the surface. This second chamber is mainly used to rest and eat. The Brachypelma-genus possesses beautiful colors, not hiding them at all. Brachypelma klaasi is a perfect display species.

Brachypelma klaasi is native to the western slopes of the Sierra Madre Occidental and some areas on the western limits of the Transverse Volcanic Belt in Jalisco and Nayarit states in Mexico. The spider lives in hot and humid deciduous forests between 300-1,400m above sea level. The soil is sandy and neutral. Annual rainfall mainly occurs between June and December, with temperatures up to 32°C. Temperatures drop during the dry periods, but with an avarage around 29°C it’s still a hot place to live in. Please be informed of the fact the spider will protect itself against the sun underneath tree trunks, branches, leaves, abandoned burrows and rocks. Do not overheat the terrarium.

Adult: 1x span width. In the wild Brachypelma klaasi creates a typical two-chamber burrow. Sometimes they don’t do that in captivity.

With a little experience, breeding a Brachypelma klaasi is not that difficult. The females are exacting, as you’ll need to simulate both winter (6-8 weeks (no food)) and spring (3-4 months (lots of food)). Let the terrarium dry out, but keep substrate slightly moist, because the female doesn’t like a humid environment close to her posterity.

• Plan mating in autumn. Cannibalism may occur. Arm yourself with long greased tweesers.

• Brachypelma klaasi makes a cocoon containing 400-800 eggs in her burrow immediately before the first rains of the season (april-may). After 2 or 3 months guarding the cocoon the spiderlings emerge in june-july. These spiderlings will stay up to 3 weeks in the burrow before dispersing in july-august. Deprive the cocoon, when desired, 7 weeks after you’ve seen her protecting the cocoon. Store the eggs at a humidity of 65-70% and a temperature of 26-29°C.

• Brachypelma klaasi is named after Peter Klaas? He collected the female for the first time.

• Mature males Brachypelma klaasi leave silk in front of the female’s burrow in order to make it more difficult for other males to locate the female?

• Brachypelmides klaasi differs from all the species of the Brachypelma genus by its sharply pointed embolus, its bipartite spermathecae and its fine bearing of plumose setae on femur IV. It is the first representative of a new genus.

• Very beautiful webpage about Brachypelma klaasi, made by E. Hijmensen.