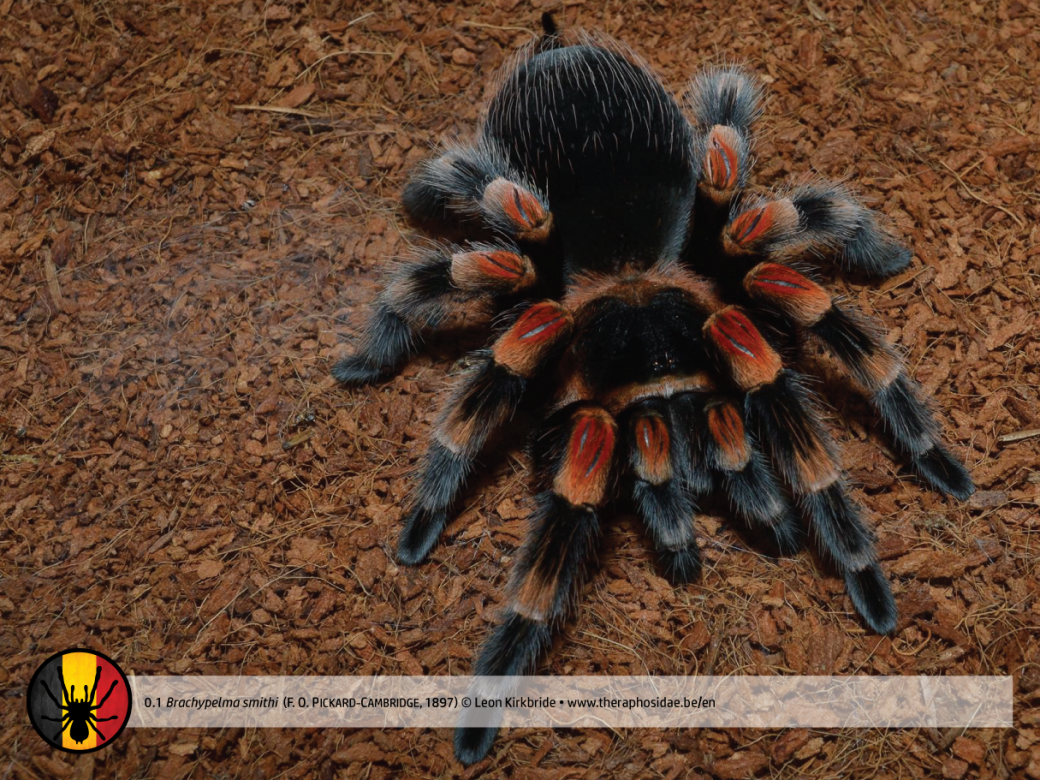 Brachypelma smithi (FOP-Cambridge, 1897), also known as “Mexican red-kneed tarantula” and “Mexican red knee”, is a stunning bird spider due to its coloration and behavior from Mexico. Exceptions still name her by one of her old names, “Eurypelma smithi” or “Euathlus smithi“. The spider is recommended for beginning hobbyists, as she is beautiful, easy to keep and very docile. For this reason the species has been smuggled a lot, mainly to China, almost endangering them to extinction in their natural habitat (source). In order to save the species, please don’t buy wild caught Brachypelma smithi, but get them from successful breeders. The current distribution of red-kneed tarantulas shows that the Balsas River basin may act as a geographic barrier. Morphological and molecular evidence were concordant and together provide robust hypotheses for delimiting. Therefore Brachypelma annitha was recently proposed and accepted as a new synonym of Brachypelma smithi (source). Don’t confuse the spider with Brachypelma auratum or Brachypelma hamorii.

We’re expecting many changes. Here’s why.

Behavior: In general Brachypelma smithi is very docile, the perfect species for beginning hobbyists. Persistent provocation can result in use of urticating setae. In order to detect their prey easily, they’ll create an almost invisible and tangled web on the surface at the entrance of their burrow. The Brachypelma-genus possesses beautiful colors, not hiding them at all. They’re out most of the time, waiting for unexpecting prey to pass.

Availability Colima-form is easy to get. Guerrero-form is rare. The rarer, the more expensive.

Brachypelma smithi is native to the western faces of the Sierra Madre Occidental and Sierra Madre del Sur mountain ranges in Mexico, being subtropical warm and rather dry except for 4 months. Temperatures almost daily reach levels up to 25°C, with maxima around 30°C. Please be informed of the fact the spider will protect itself against the sun underneath tree trunks, branches, leaves, abandoned burrows and rocks. Do not overheat the terrarium.

With a little experience, breeding a Brachypelma smithi is not that difficult. The females are exacting, as you’ll need to simulate both winter (6-8 weeks (no food)) and spring (3-4 months (lots of food)). Let the terrarium dry out, but keep substrate slightly moist, because the female doesn’t like a humid environment close to her posterity.

• From the moment the female is visible at the entrance of her burrow, you might expect 150-550 spiderlings to come out 8-10 weeks later. Deprive the cocoon, when desired, 7 weeks after you’ve seen her protecting the cocoon. Store the eggs at a humidity of 65-70% and a temperature of 26-29°C.

• Brachypelma smithi is the favorite species for beginning hobbyists?

• Brachypelma annitha was proposed and accepted as a new synonym of Brachypelma smithi in 2016 (source)?

• Very beautiful webpage about B. smithi, made by E. Hijmensen.