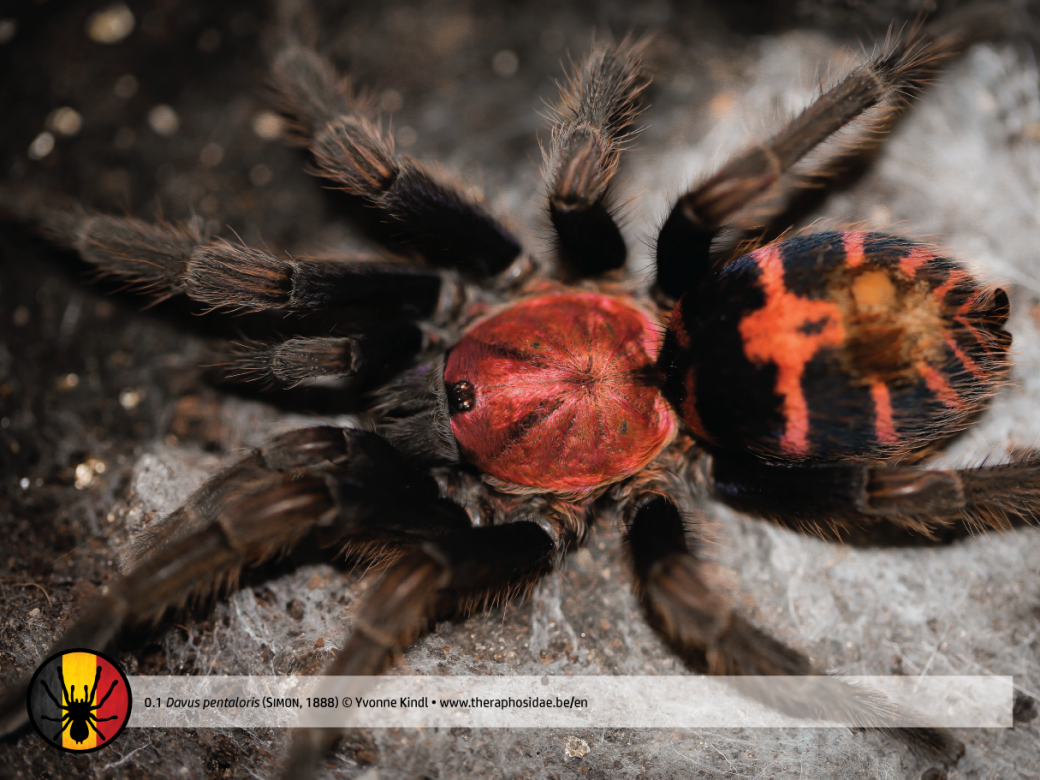 Davus pentaloris (Simon, 1888), als known as “Guatemalan tiger rump”, is a stunning bird spider due to its coloration and pattern from Mexico and Guatemala, Alta Verapaz. With an avarage span width around 11-12cm she’s rather small compared to other bird spiders. The distinct coloration, in combination with the pattern, should just like wasps scare possible attacker. That’s why she is sometime named as “wasptarantula”. The genus Davus was considered to be a synonym of Cyclosternum, but that’s no longer accepted. Don’t confuse Davus pentaloris with the Davus fasciatus either, commonly known as “Costa Rican tiger rump”, native to Costa Rica (San Carlos, Province of Alajuela). This is another species of which only a few people have had one (source). The difference between both species becomes visible in the color of the carapace, black in Davus fasciatus versus orange in Davus pentaloris, and the different pattern on the spider’s abdomen (picture). However you might have bought a “Cyclosternum fasciatum‘, as Davus pentaloris was referred to for years, the possibility you got a real Davus fasciatus (picture) is almost nonexistent.

Behavior: The spider will try to flee at first. Persistent provocation can result in use of urticating setae. Their responses are quite fast.

Life expectancy: Females can become up to 10-11 years old. Males are given a shorter lifetime of 3 years.

Davus pentaloris lives in warm and temperate area with a rainy season during 6 consequtive months. Local temperatures rarely exceed 28°C, with highest temperatures measured during rainy season from may until october. Minima never go below 15°C during rainy season by night, sometimes dropping down to 11°C when between november and april.  Please be informed of the fact the spider will protect itself against extreme temperatures underneath tree trunks, branches, leaves and abandoned burrows. Do not overheat the terrarium.

* The spider lives in tropical forests. Provide many branches and leaves. She’ll use it to create her burrow. 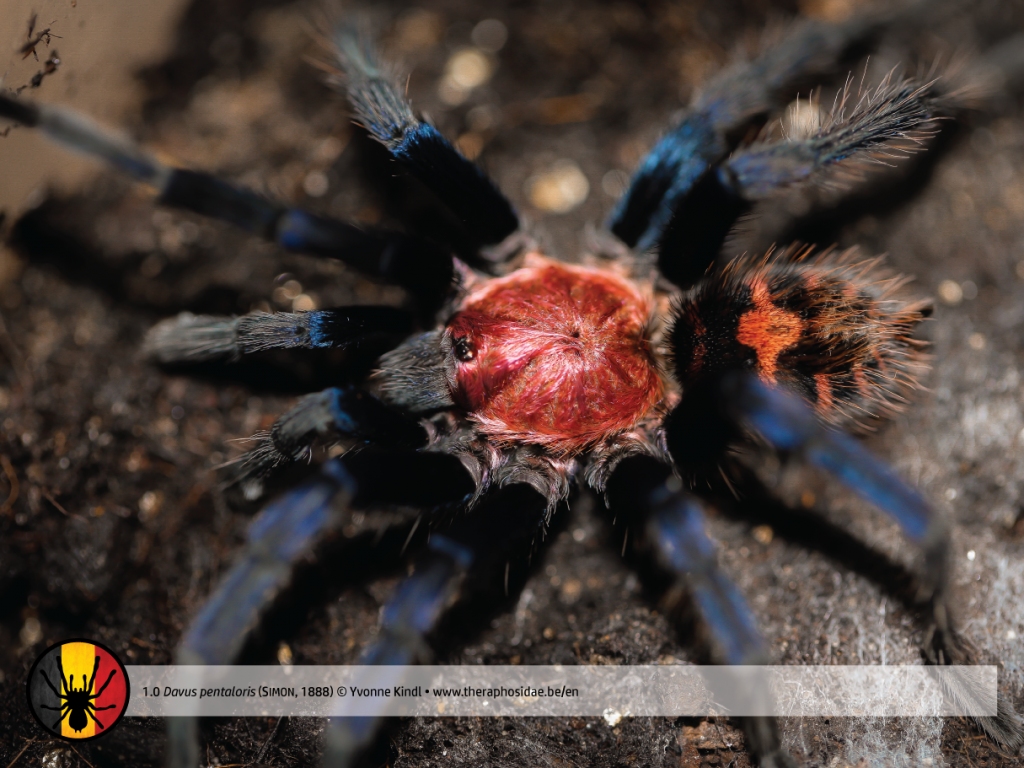 • You might be surprised, as all of the internet is telling different, but Davus fasciatus has a black carapace.

Breeding Davus pentaloris is not always that easy. They’re, however, being bred successfully plenty of times in the hobby. Enough substrate, branches, leaves and a constant temperature between 23-25°C should do the trick. Cannibalism may occur.

• Provide an escape route for the male.

• Plan mating in autumn and let the cage dry out for 3 weeks. Raise up humidity and temperatures for 2-3 degrees.

• The female will start making the cocoon 4-6 weeks after mating. Deprive the cocoon, when desired, 4 weeks later. Store the eggs at a humidity of 90% and a temperature of 24-26°C.

• Davus fasciatus has a black carapace and a different pattern dorsally on the abdomen?

• The possibility you own a Davus fasciatus is almost nonexistent?