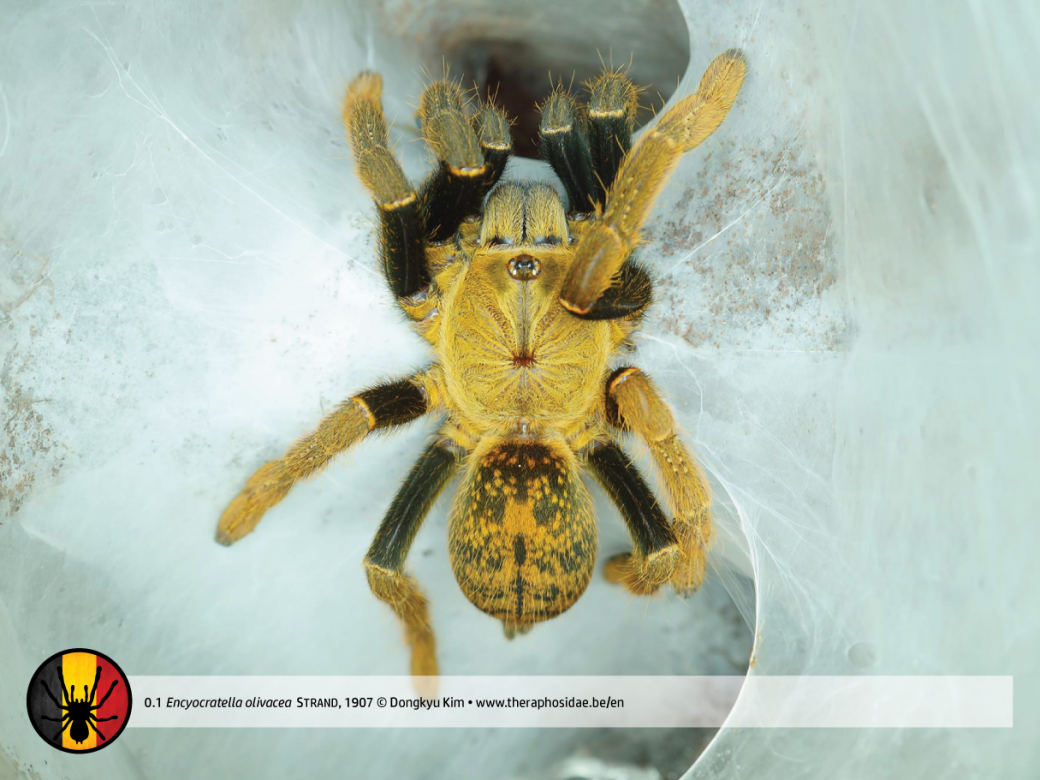 Encyocratella olivacea Strand, 1907, also known as “Tanzanian black & olive baboon tarantula”, is a wonderful bird spider due to its coloration and (web)behavior from Tanzania. She is often mistakenly being kept as a burrowing species, however she’s showing both arboreal behavior and appearance. Remarkably, the Brazilian bird spider Sickius longibulbi and Encyocratella olivacea are the only 2 theraphosids around the world of which the females don’t possess a spermatheca. After a successful mating, the man’s sperm will be stored in the oviducts and uterus externus (source). However she’s been linked with baboon spiders, Encyocratella olivacea belongs to the subfamily of the Stromatopelminae and not the Harpactirinae. African bird spiders are commonly given the title of baboon spider, which explains why she carries the name.

Origin: Africa, Tanzania, near the mountains of Arusha and Usambara.

Behavior: The spider will try to flee at first. Persistent provocation can result in a threat pose and/or a bite. Due to the fact Encyocratella olivacea might sometimes combine both arboreal and burrowing characteristics, a thick layer of humid substrate and an arboreal set-up is required. Encyocratella olivacea is known to create beautiful silken labyrinths.

Encyocratella olivacea lives in the rainforests on the southern slopes of mount Meru, located 2200m above sea level and 800m higher than Arusha town. Lapse rate for tropical mountains is -0,5°C every 100m of altitude. Therefore estimated temperatures are around 4°C lower than in Arusha town (source). Some species, however, were found higher in the mountains, where it is even cooler (Vejay S. Kumar, BTS Journal, May 2004, 19). Arusha has a tropical savanna climate with 2 rainy seasons (March-May and November-December). Maxima and minima can differ up to 15°C, making Encyocratella olivacea a very hardy species. At night temperatures are rather cold.

* Due to the fact Encyocratella olivacea might sometimes combine both arboreal and burrowing characteristics, a thick layer of humid substrate and an arboreal set-up is required.

* During rainy seasons the spider lives in humid area. Note that cages with high humidity levels are very sensitive for mites and other parasites. Please take your precautions.

For more information about the local climate: Klik hier.

Encyocratella olivacea is the odd man out. However plenty of breeders recommend you to do nothing special, consistent breeding successes are rare throughout the world. Nowadays, there are only a handful breeders consistently completing breeding projects successfully.

• Only start breeding 4-6 weeks (or later) after the spider molted. Due to the lack of spermathecae and the related fact she stores the sperm in oviducts and uterus, Encyocratella olivacea won’t lose fertilization after molt.

• Plan mating at the end of wet season. Let the tank dry out and make temperatures drop a few degrees for 7 weeks.

• The female will start making the cocoon 2 months after mating. Deprive the cocoon, when desired, 4 weeks later. Store the eggs at a humidity of 70% and a temperature of 26-29°C. Sometimes the female drops a second eggs sac, containing less fertilized eggs than the first one.

• All this being said, you might consider to do nothing especial. Keep humidity stable (70-80%) and temperatures as above. It should work, as I’ve heard.

• Encyocratella olivacea requires an arboreal set-up, but will probably build her burrow on the substrate between bark and glass?