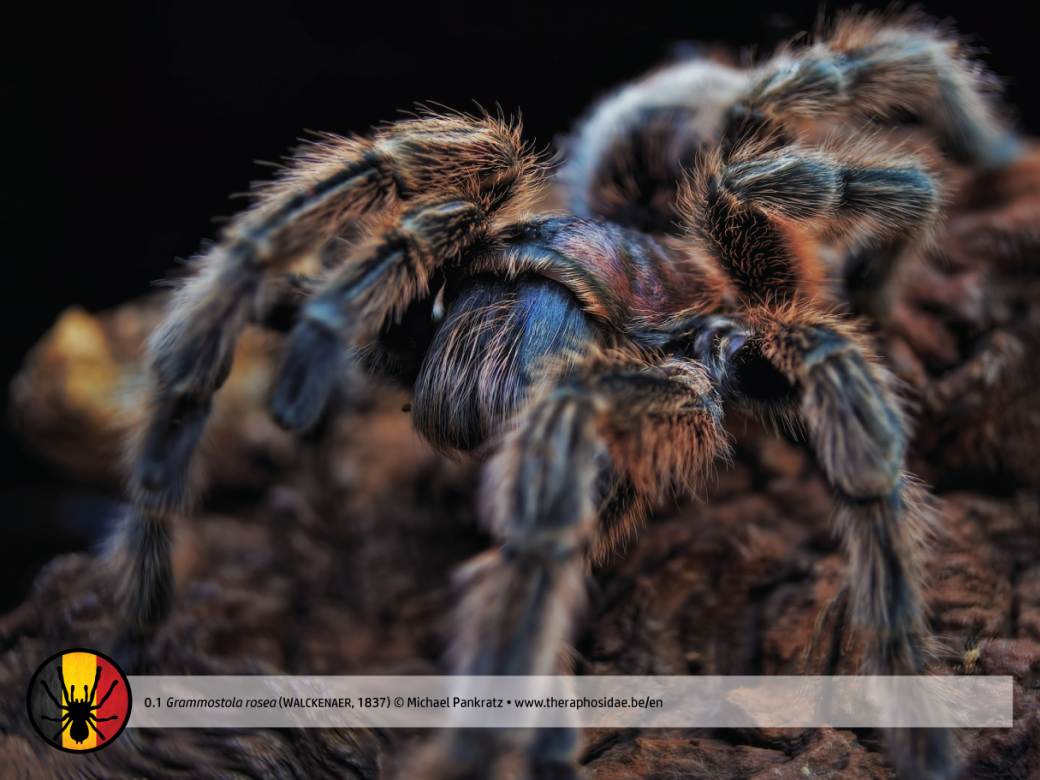 Grammostola rosea (Walckenaer, 1837), also known as “Chilean rose tarantula”, is a neutral, but very beautiful Chilean species with a rather docile temperament. The name however, Grammostola rosea, remains problematic because the original type description is at best vague and the type material is lost. Subsequently plenty of “reddish” Chilean birdeaters in the hobby were called Grammostola rosea without any scientific data. Therefore the common species known as Grammostola rosea in the pet trade remains to be questioned and investigated (Danniella Sherwood). In this caresheet we use the name “Grammostola rosea“, due to the fact she’s (wrongly) known as such, but keep all previous information in mind. Grammostola rosea is one of the most perfect bird spiders for beginning hobbyists.

Origin: Northern-Chili (from the borders with the Atacama desert in the North until a little more South near Santiago). She is unofficially being reported in Bolivia and Argentine as well.

Behavior: Grammostola rosea is a very docile and visible bird spider. The spider will try to flee at first. Persistent provocation can result in use of urticating setae, although that’s rather the exception.

Life expectancy: Females become up to 20-25 years old. Males are given a shorter lifetime around 5 years.

Grammostola rosea lives in dry scrubland, experiencing 4 seasons. During summer temperatures reaching levels up to 26-28°C, sometimes getting rather hot with 35°C. Those temperatures drop drastically far below 10°C during winter. The Atacama-desert is probably one of the harshest environments on the planet, suspecting that Grammostola rosea‘s habitat is not that severe. A constant water source comes in the form of prey and fog, directly sent by the winds from the Pacific Ocean. Without these fogs there should be no life at all. Take a look at this episode about “deserts” (fogs in the Atacama-desert starting at 20′) to get a view of the environment.

* In captivity Grammostola rosea hasn’t been seen burrowing that often. In their natural habitat however, they make their own or live in abandoned burrows. Provide enough substrate.

Wet season: June, july, august. With a little rain 1 day out of 4 days, “wet” is relative.

Caution: Make sure you’re not crossbreeding species, as some species are very similar to others.

After a succesful mating the female will shield herself from the outside world with a wall of web. Around 6 months later she’ll start making a rather large cocoon, probably containing up to 500 fertilized eggs.

• Female spiders benifit from a cooling period prior to mating. Simulate a winter from 2-3 months (10-12°C), before mating. Don’t feed or bother the spiders during this period.

• Raise up temperature for 6 months to 22-24°C. Make sure the female is well-fed (not obese) before you introduce the male.

• Make the temperature rise again to 27°C after 6 months, while raising up humidity up to 60%. This will trigger the female to start making the cocoon. Make sure humidity won’t climb above 70%, leaving the cocoon dry. 30-40 days after the cocoon was made 250-400 spiderlings might show up. Deprive the cocoon, when desired, 4 weeks after it was made. Store the eggs in the incubator at a humidity of 65-70% and a temperature of 26-29°C.

• Grammostola rosea in the pet trade might be another species? Use of the name is in fact incorrect.

• Grammostola rosea, Brachypelma albopilosum or Brachypelma smithi was probably the first bird spider for many hobbyists?

• Lots of spiders from the Grammostola-genus have a past in the Phrixotrichus-, Euathlus and/or Citharoscelus-genus?

• Grammostola rosea is notorious for her mood swings?

• Grammostola porteri was formerly considered a form of the same species as the red spider (known in the hobby as Grammostola rosea RCF), but now considered likely not to be?

• An integrative approach for species delimitation in the spider genus Grammostola (Theraphosidae, Mygalomorphae).

Special thanks goes out to Danniella Sherwood for providing important data!