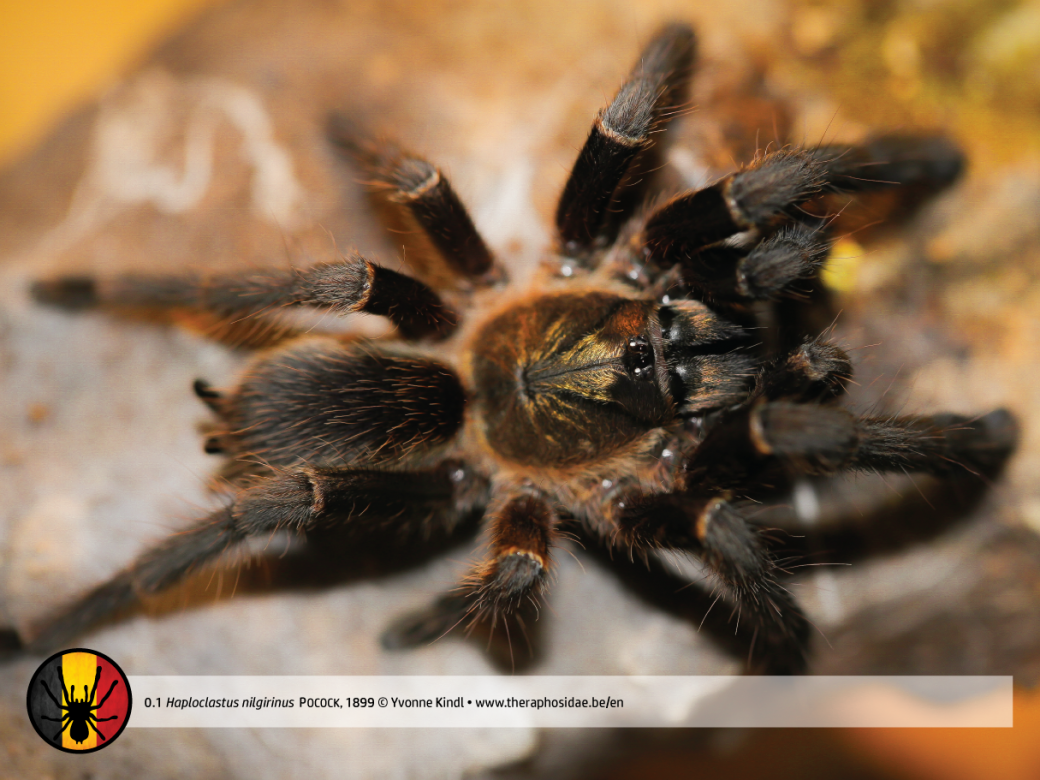 Haploclastus nilgirinus Pocock, 1899, also known as the “Nilgiri dark mustard”, is a very stunning bird spider due to its coloration from the Nilgiri hills in Mahon-Daly, India. The name “nilgirinus” is reffering to the Nilgiri hills, as it does for other spiders as Zelotes nilgirinus, Sphingius nilgiriensis, Phintella nilgirica, Heteropoda nilgirina as well. The genus, as part of the subfamily of the Thrigmopoeinae, is endemic to India and was established by the description of Haploclastus cervinus by Simon in 1892. Raven (1985) synonymised the genus Phlogiodes Pocock, 1899 with Haploclastus based on the presence and the arrangement of stridulatory setae. With the inclusion of four species of Phlogiodes, the genus Haploclastus comprises eight species which are restricted to India (source). It is speculated to unify Thrigmopoeinae under the genus Thrigmopoeus. Haploclastus nilgirinus is differing from Haploclastus cervinus, at least according to the description, in being much larger and having legs IV shorter than legs I and II. Little is known about the genus, for which systematization demands specification. Thrigmopoeinae are widely distributed in mainly tropical areas throughout South- and West-India, although a species in particular is often restricted to small patches of the forests.

Origin: Nilgiri hills from the part of Western Ghats in Mahon-Daly, Savarimullay in Vandiperiyar, Travancore, Kerala, India. Type female is from the Nilgiri hills.

Behavior: The spider will try to flee at first. Persistent provocation can result in a bite. Spiderlings were often seen burrowing, whereas older species live a semi-arboreal life. The spiders are quite shy and nervous, only showing themselves at night.

Sexual dimorphism: Yes. Females are heavier than males. Males have about the same leg span and colors are not as vibrant as in females.

Haploclastus nilgirinus lives in tropical warm and humid area. Temperatures almost daily reach levels up to 30°C with significant humidity levels from april until november. Rainfall and temperature ranges vary significantly between the eastern and western extremes. The Eastern Ghats receives less rainfall than the western coast. Rainfall there ranges between 900 and 1,300 millimeters annually. In the hills of Western Ghats temperatures are “cooler”, reaching maxima around 30°C, and the environment is more humid due to rainfalls and the coast nearby. Monsoon in Western Ghats starts in june and ends in september. To escape the heat, the spider will burrow itself and/or create a decent semi-arboreal hide. Do not overheat your terrarium. (photo habitat Haploclastus spp.)

* Provide a burrowing and arboreal set-up.

* During 7-8 months the spider lives in very humid area. Note that cages with high humidity levels are very sensitive for mites and other parasites. Please take your precautions.

Wet season: April, May, June, July, August, September, October, November. Average rainfall around 1 out of every 2 days between april and november. • Legs IV of Haploclastus nilgirinus are shorter than legs I and II?

• The genus Haploclatsus is poorly examined?

• The carapace on Haploclastus nilgirinus is about 1/4 longer than wide, quite high and convex?

• Arthropods and their conservation in India.

• About: Spiders in the Western Ghats, India.