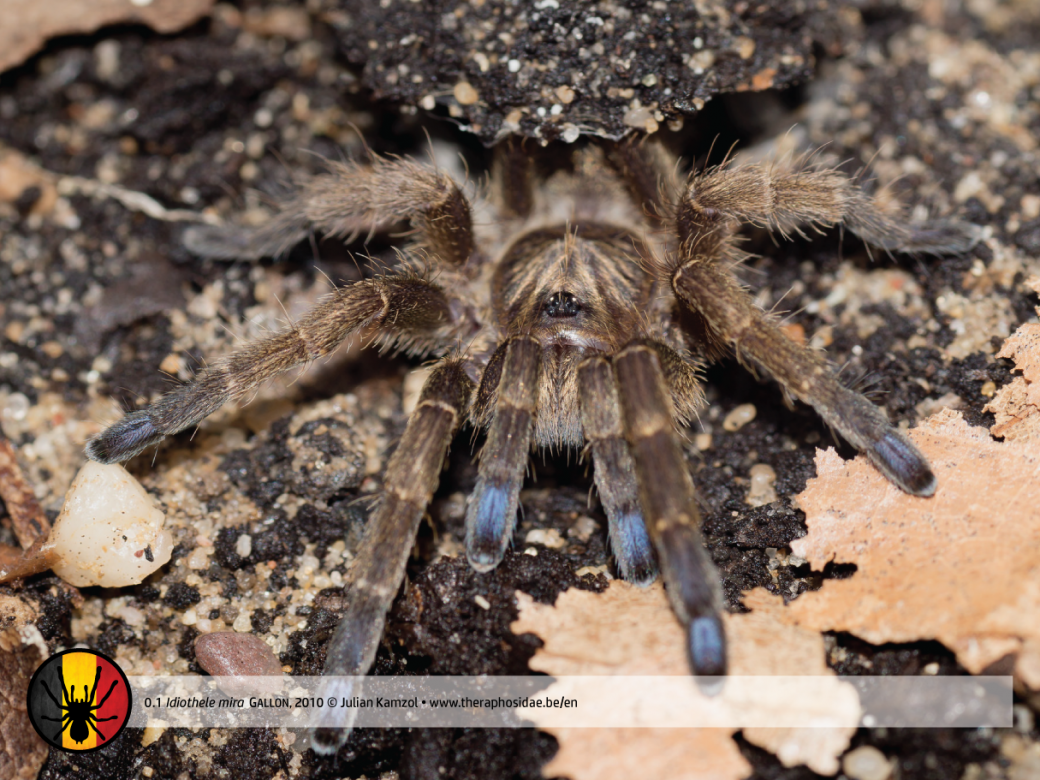 Idiothele mira Gallon, 2010, also known as “Blue foot baboon” is a beautiful bird spider due to its coloration and trapdoor-behavior from South-Africa. She’s easily recognized by her blue tarsi and metatarsi. African bird spiders are commonly given the title of baboon spider, which title theoretically only belongs to the subfamily of the Harpactirinae. Therefore Idiothele can be considered a real baboon spider. In both sexes the carapace of Idiothele mira is more elongated than the almost circular carapace of Idiothele nigrofulva. Freshly moulted specimens of Idiothele mira lack the blue colour, which develops a few days post-moult. The blue coloration is caused by a farinaceous substance on the integument, rather than being associated with setae (source).

Life expectancy: Females live up to 12 years old. Males are given a shorter lifetime of 3 jaar.

Behavior: The spider will try to flee at first. Persistent provocation can result in a bite. Remarkable about Idiothele mira is the fact they construct densely silk-lined tunnels (cells) beneath rocks and logs in lightly wooded habitats. The burrow entrance can be sealed with a thin, wafer-like, silken trapdoor, but this is not always obvious. They won’t show their beauty that often, but once out you’ll be stunned.

Idiothele mira lives in subtropical area. Due to its location in the Southern hemisphere, Tembe Elephant Park experiences winter and summer in opposition to the times they are experienced in Europe and North America. The park lies in an area of summer rainfall and the wet season months (october to april) tend to be hot and humid. The winter season (may to september) is the dry time of the year and although daytime is pleasantly warm, it gets quite cold at night. It seldom rains all day during rainy season, but heavy thunderstorms happen regularly. During the winter there is a little rain, but there could be an occasional shower due to the proximity to the coast. Compared to the summer months, the heat is less oppressive and skies are usually clear.

* During rainy season (7 months) the spider lives in wet area. Note that cages with high humidity levels are very sensitive for mites and other parasites. Please take your precautions.

Pairings with Idiothele mira normally don’t bring too much problems. In their natural habitat, males mature in january. Females become fertile in between 1,5-2 years after birth.

• Plan mating by a humidity of 70-80%, keeping temperatures fairly constant around 23°C.

• The female will start making the cocoon 1-2 months after mating. Deprive the cocoon, when desired, 4 weeks after you’ve seen her making it. Store the eggs at a humidity of 85-95% and a temperature of 26-28°C. Expect 30-50 spiderlings to come out. It’s not uncommon the female creates a second egg sac a few months after the first one.

• From the revision in 2010: A captive female produced a single fixed hammock egg-sac suspended within its retreat. The contents of this egg-sac failed to develop, but numbered 32 large (3.98 mm diameter) eggs in total (pers. obs.).

• The name “Idiothele mira” comes from the Latin word “mirus” (wonderful), referring to the sky-blue coloration on the tarsi and metatarsi.