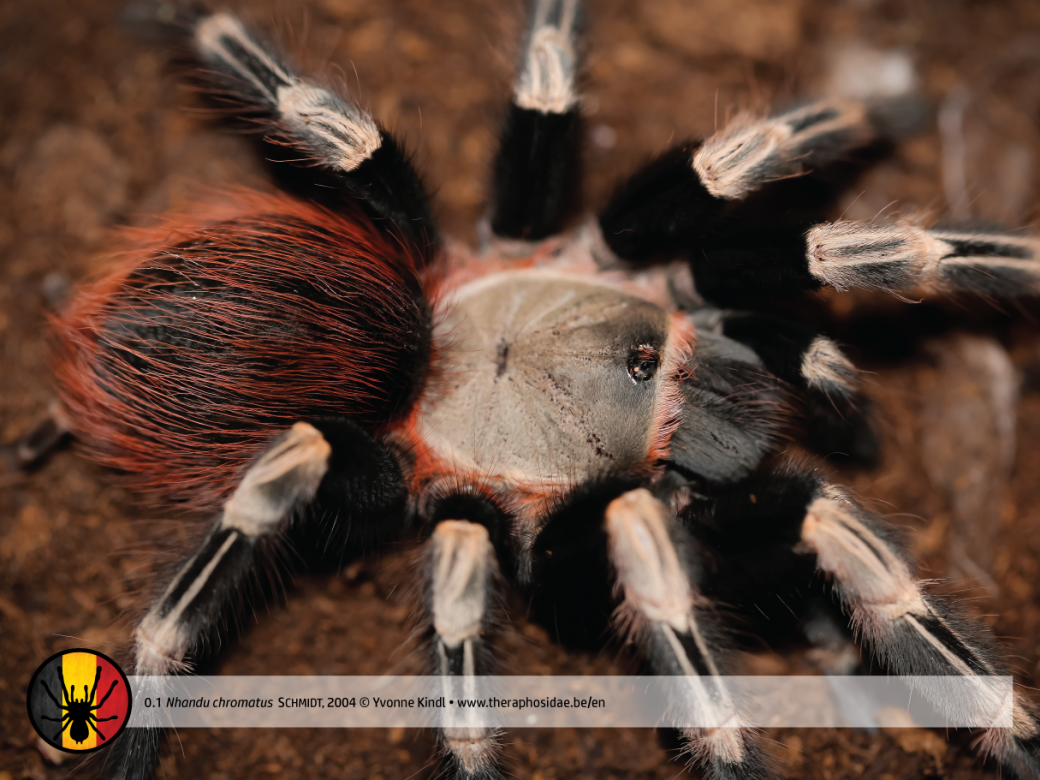 Nhandu chromatus Schmidt, 2004, also known as “Brazilian red and white” or “White striped birdeater”, is a very beautiful bird spider due to its coloration and behavior from Brazil and Paraguay. With a golden brownish carapace, red hairs on the abdomen and the beautiful markings on the legs, she’s a wonderful showpiece in every collection. Beginners sometimes confuse her with Acanthoscurria geniculata. Both spiders are easily distinguished by the color on their carapaces. You’ll sometimes hear people say Nhandu chromatus is the same species as Vitalius cristatus (Mello-Leitão, 1923), renamed as Lasiodora cristata. Nhandu chromatus, however, was described as a new species in 2004, not being confirmed by the majority of arachnologists. Unless its taxon is reviewed it can be easily transfered in further revisions (source). In the “World spider catalog” you can see both spiders being categorized as different species: Nhandu chromatus, Lasiodora cristata. Nhandu chromatus is held in lots of terraria, while the real Lasiodora cristata is not available in the hobby.

Behavior: Nervous. The spider will try to flee at first. She won’t hesitate to shed its urticating setae or give you an impressive threat pose. Persistent provocation can result in a bite. Urticating setae of Nhandu chromatus are remarkably effective against mammals, especially in the eyes and/or inhalation. Mine is a working class hero, moving lots of substrate once in a while.

Life expectancy: Females can become up to 13-15 years old. Males are given a shorter lifetime from 3-4 years.

Nhandu chromatus lives in subtropical humid area, such as forests and grasslands. Temperatures almost daily reach levels 25°C, sometimes dropping to 15°C at night. Please be informed of the fact the spider will protect itself against the sun underneath tree trunks, branches, leaves and abandoned burrows. Do not overheat the terrarium.

Nhandu chromatus is a very nervous bird spider. The slightest disturbance nearby often results in use of urticating setae and/or a threat pose. She’s not different to her male, who’s probably facing a furious lady. Nevertheless experienced hobbyists are able to breed successfully.

• 2-4 months after mating the female will start making her cocoon. Deprive the cocoon, when desired, 4 weeks later. Store the eggs in the incubator at 26-29°C and a humidity of 80-90%. Expect hundreds of spiderlings to come out. Cocoons with more than 1000 eggs have been observed.

• Bertani, Rogério. Revision, cladistic analysis and zoogeography of Vitalius, Nhandu and Proshapalopus with notes on other Theraphosinae genera (Araneae, Theraphosidae).