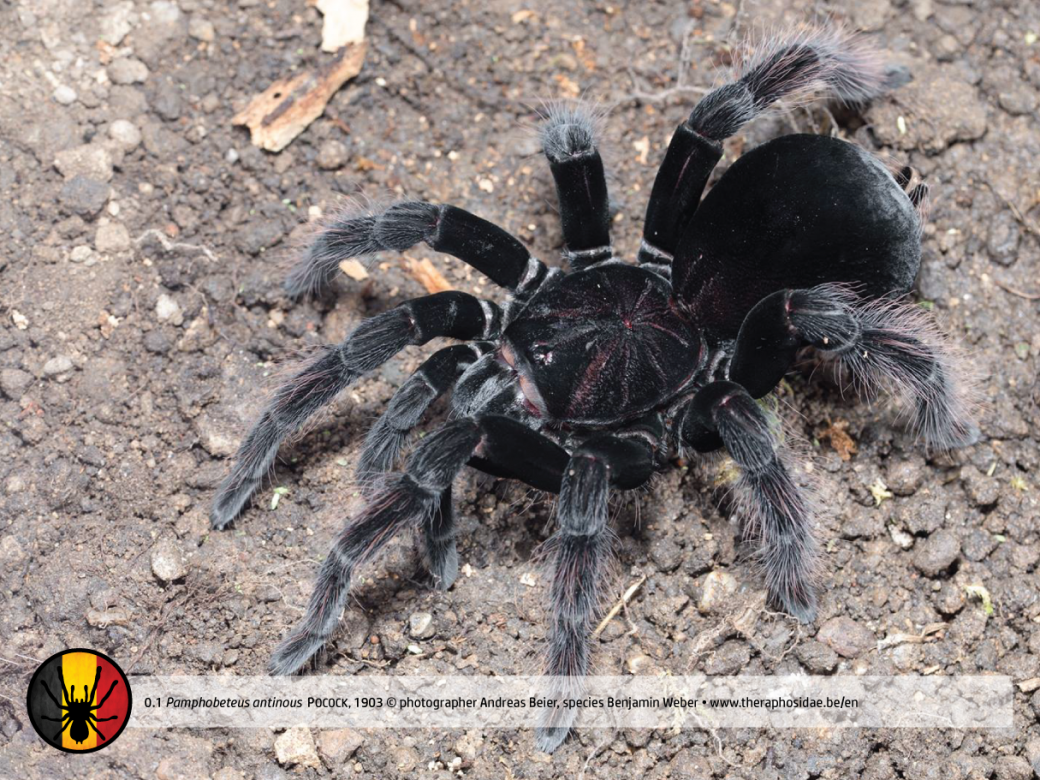 Pamphobeteus antinous Pocock, 1903, also known as “Bolivian blue leg birdeater”, “Steely blue leg” or “Big black tarantula”, is a remarkable bird spider due to its size and coloration from the tropical forests of Bolivia and Peru. Females are blackish, with short olive-black hairs, showing a characteristic woolly appearance and some long red hairs on the abdomen and legs. Pocock specified the species was possibly based upon the unknown male from Bogota, described by Ausserer as Lasiodora ferox, which has a woolly clothing as well. Pamphobeteus antinous‘ males are brightly colored, showing off a steely blue appearance, with violet and copper shimmering femora. At the time Pocock described the male palpal organ to be a key to seperate Pamphobeteus antinous from other Pamphobeteus species, Pamphobeteus antinous was the only species known outside the Andean region. The division between broad and slender palpal embolus, however, is related to a northern/southern distribution and not eastern/western as suggested earlier. Females of Pamphobeteus antinous and Pamphobeteus vespertinus were poorly described by Schmidt in 1993, but it’s not sure these descriptions are conspecific. People easily confuse Pamphobeteus spp. with Xenesthis spp. due to the fact they appear to be the same by the typical patches behind the eyes on the carapace. Nevertheless both genera are easily distinguished by the scopula pads on leg 4. All Xenesthis spp. show a larger scopula pad on the inner side of the fourth leg’s femur (ref. “The annals of magazine of natural history, 1901, Pocock, page 546”), where scopula pads on Pamphobeteus spp. are only apically present (look below). What you have to keep in mind in previous sentence is that Pocock was actually talking about the femoral brushing and not the scopula pads on the metatarsi of fourth leg pair. It is said some Pamphobeteus antinous grows larger. Together with other Theraphosa spp. the bigger ones are considered to be the only bird-eaters able to compete with Theraphosa blondi to be biggest spider of the world.

Type: Terrestrial bird spider. In their natural habitat they were found burrowing holes up to 1,5m deep.

Body length: ≤ 7-8cm. It is said some Pamphobeteus antinous are bigger and can reach 11cm.

Behavior: The spider will try to flee at first, probably striking of urticating setae in the meanwhile. To do so they typically raise their abdomen. If disturbance continues, Pamphobeteus antinous will shed their setae properly aimed, but a threat pose is rather rare.

Life expectancy: Females can become up to 15 years old. Males are given a shorter lifetime from 4 years.

Sexual dimporphism: Yes. Females are heavier than males. Males have a steely blue appearance, whereas females are blackish.

Pamphobeteus antinous lives in tropical warm and humid area, in the rainforests of Bolivia and Peru. Temperatures almost daily reach levels up to 30°C with high humidity. Please be informed of the fact the spider will protect itself against the burning sun underneath tree trunks, branches, leaves and abandoned burrows. In their natural habitat Pamphobeteus antinous have been seen living in burrows up to 1,5m underground. With an avarage annual rainfall of 1000-4000mm the Beni-department is one of the wettest regions of Bolivia, with even more wetlands than the well-known Pantanal. During the winter (Jun-Jul) cool winds are blowing northwards from the South Pole and Argentina’s Patagonia region, sometimes dropping temperatures significantly. Do not overheat the terrarium.

* During winter (Jun-Jul) both temperature and humidity may drop to minima. Aim for maxima throughout the rest of the year.

Adult: 1-1,5x body length. The spider probably won’t burrow too much. Provide a hiding place above the surface.

* Pamphobeteus antinous is an opportunistic burrower. Please provide her this opportunity.

Xenesthis species differ from Pamphobeteus species by the extend of the wrapping of metatarsi scopulae on leg IV. Pocock (1901c) described the genus as having “scopulate to base” as a distinguishing feature compared to Pamphobeteus which has “scopulate apically”. In Xenesthis the scopulae generally wraps around the entire metatarsus, ventral to dorsal. However, this is not always the case and some species only have ventral-retrolateral scopulae as shown by Esche (2015). In Pamphobeteus the scopulae are ventrally present in the conventional fashion and generally covers about 1/4 distally. However, Schmidt (1995e) and Bertani et al. (2008) both report species in the genus with apical scopulae, which is more than 1/4. Metatarsal scopulae are not present ventrally on the metatarsus of any Pamphobeteus species. 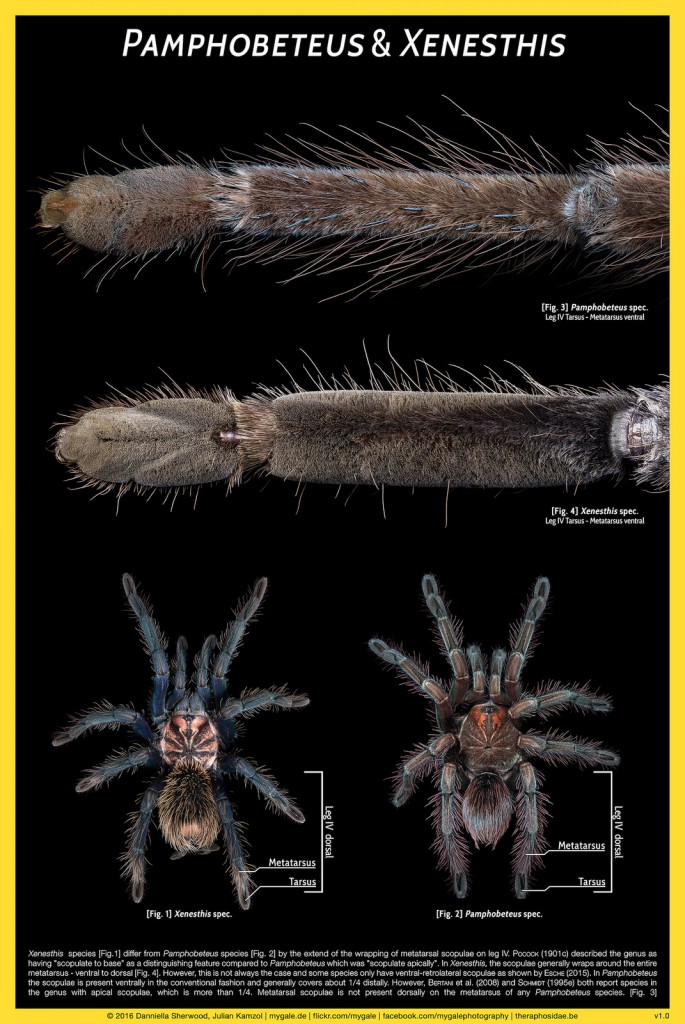 Pairing a Pamphobeteus antinous does not always run smoothly. Cannibalism may occur before or after copulation. Make sure you own 2 species from the same region.

• Only start breeding 2-3 months (or later) after the spider molted. If the female molts between pairing and cocoon, the eggs will remain unfertilized.

• Provide a hiding place and an escape route for the male. Stay close during mating.

• 2-5 months after mating the female will start making her cocoon, counting around 100 eggs. Deprive the cocoon, if desired, 5-6 weeks after you’ve seen her making the cocoon. Store the eggs at a humidity of 100% and a temperature of 28-30°C. Don’t expect too much spiders to survive. Be advised incubation is challenging, as the little spiders were seen emerging deformed. Minimize the possibilities of deformed spiders by making sure they’re able to emerge head-down.

• Make sure you leave the female in perfect conditions undisturbed after a successful mating. Take away every prey she refuses. Pamphobeteus antinous is notorious to destroy her cocoon quickly.

• It goes around some Pamphobeteus antinous can reach sizes almost as big as Theraphosa blondi?

• Mostly Peruvian Pamphobeteus antinous can be found in our terraria?

• Pamphobeteus antinous is not the same species as, for example, Pamphobeteus cf. antinous iquitos? “cf.” stands for “confer”, which means “compared with”, indicating an uncertainty in attributing a specimen to a taxon.

• Bird spiders from the genus Pamphobeteus-, Xenesthis– and Vitalius are rather hard to distinguish by the unexperienced eye?

• Some Pamphobeteus-spiderlings have a beautiful pattern on their abdomen?