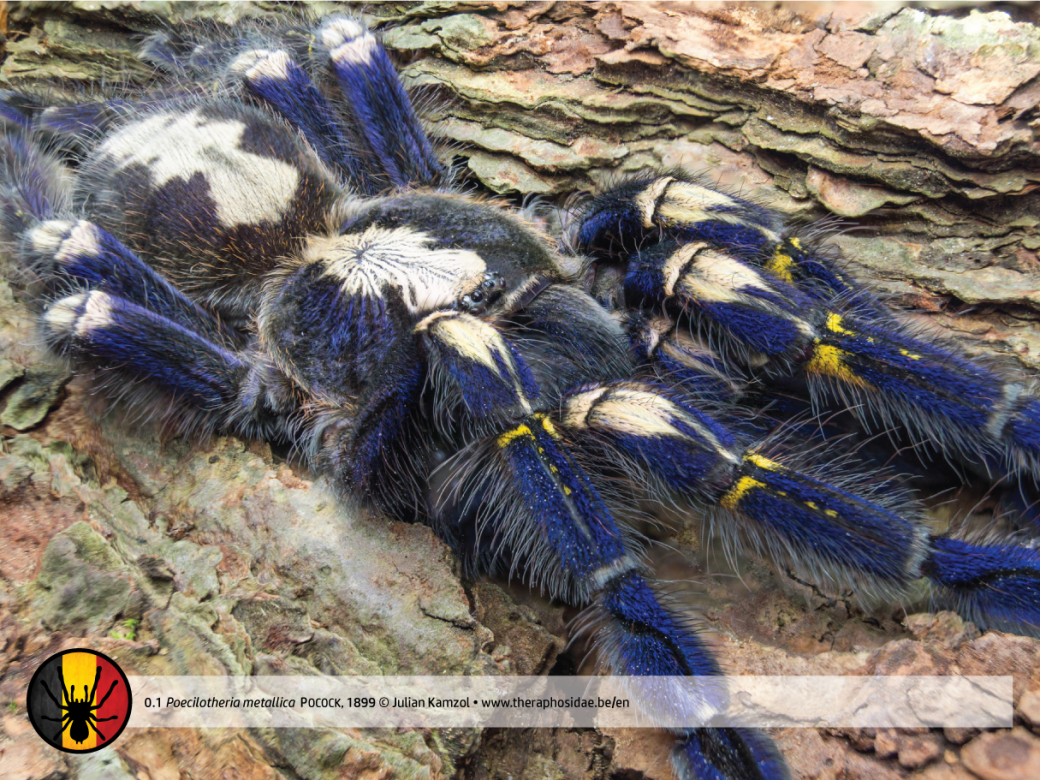 Poecilotheria metallica Pocock, 1899, also known as “Gooty sapphire ornamental”, “Metallic blue ornamental” or “Gooty tarantula”, is a stunning bird spider due to its coloration and pattern from Southeast India. Gooty in its common name refers to the place where she has been found for the first time, which is wrong since although the animal was caught in the railway timber yard in Gooty, the specimen could have come from a total other area. After decennia she was rediscovered in 2001 in a highly disturbed forest between Nandyal and Giddalur. The Poecilotheria-genus is well-equiped with distinctive colors and patterns, although Poecilotheria metallica is easily distinguished from the others by its metallic blue coloration. The bird spider is a true showpiece in the hobby, smuggled plenty of times to America and Europe. This in combination with a shrinking habitat, makes that the spider is locally critically endangered. In order to save the species, please don’t buy wild caught Poecilotheria metallica, but get them from successful breeders (source). Intriguing about the genus is their typical resting pose. With the first two leg pairs forward, the last two leg pairs backward and an angry look, they’re sending a clear message: “Don’t come too close!”

“The habitat where the species occurs is completely degraded due to lopping for firewood and cutting for timber. The habitat is under intense pressure from the surrounding villages as well as from insurgents who use forest resources for their existence and operations. It is assumed that the area of habitat has decreased over the years, but there is definitely a decline in quality of habitat for the spiders who seek cavities and deep crevices in old growth forests. This species is categorized as CR because of its range restricted to less than 100 km², single location and continuing decline in habitat quality. (source)”

Venom: “Strong.” Depending the location of the bite and the amount of venom released, this might be a painful experience. More info, see V. Literature.

Behavior: The Poecilotheria-genus is known to be as beautiful as potentially dangerous. The spider will try to flee at first. Persistent provocation can result in a bite. The bites are very painful and can result in hospitalization. The species will create a assymetric tunnelweb, being mostly visible at night. Interesting is the fact Poecilotheria metallica can be kept communal. Provide a correct amount of food in order to prevent cannibalism. Don’t put them together when they were once separated.

Life expectancy: Females become up to 11-12 years old. Exceptions become 15 years old. Males are given a shorter lifetime of 3/4 years.

Poecilotheria metallica lives in tropical humid and warm area. Temperatures almost daily reach levels up to 30°C, with heat waves up to 35°C. Please be informed of the fact the spider will protect itself against the burning sun in tree crevices, hollow branches, leaves and buildings. Rainfalls can be short and intense. Very moist substrate from time to time is good for spiders of the Poecilotheria-genus, but make sure no moldproblems occur. 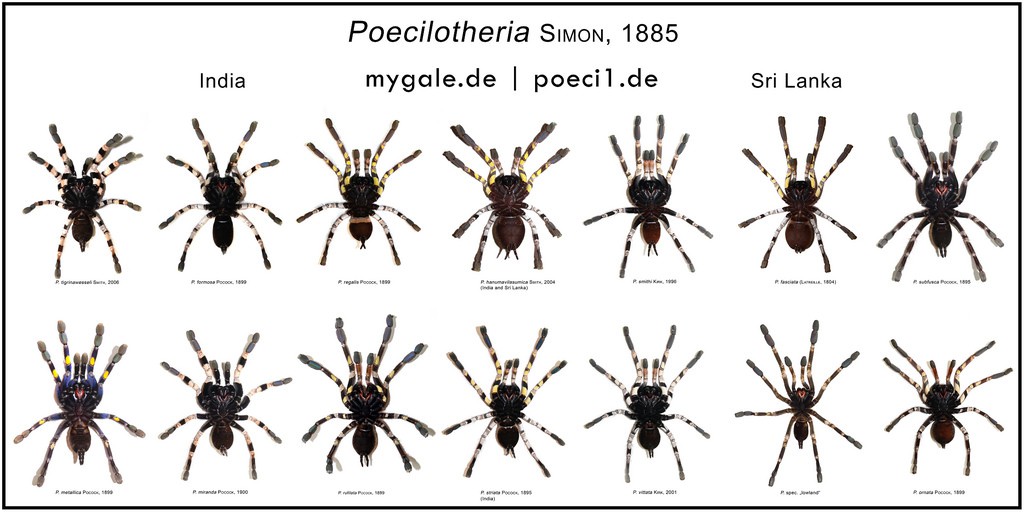 • Plan the pairing at the end of wet season and let the cage dry out for 4/6 weeks from the moment you see the female growing bigger, while temperatures drop to 22/23°C (less important). Systematically raise up environmental factors. This will trigger the female to start making the cocoon.

• The female will start making the cocoon 4-6 months after mating (sometimes it takes even more time). Deprive the cocoon, when desired, 5 weeks later. Store the eggs at a humidity of 80-90% and a temperature of 25-29°C.

• Cannibalism may occur, but only a few spiders will be lost. Due to the fact the spiders eat better, lots of breeders decide to keep the spiders in small groups together.

• “Gooty” in her common name is probably incorrect? However Poecilotheria metallica has been discovered in Gooty for the first time, she was discovered in the railway timber yard. Transport has probably influenced its presence there.

• Poecilotheria metallica was rediscovered after 102 years in a highly disturbed forest between Nandyal and Giddalur?