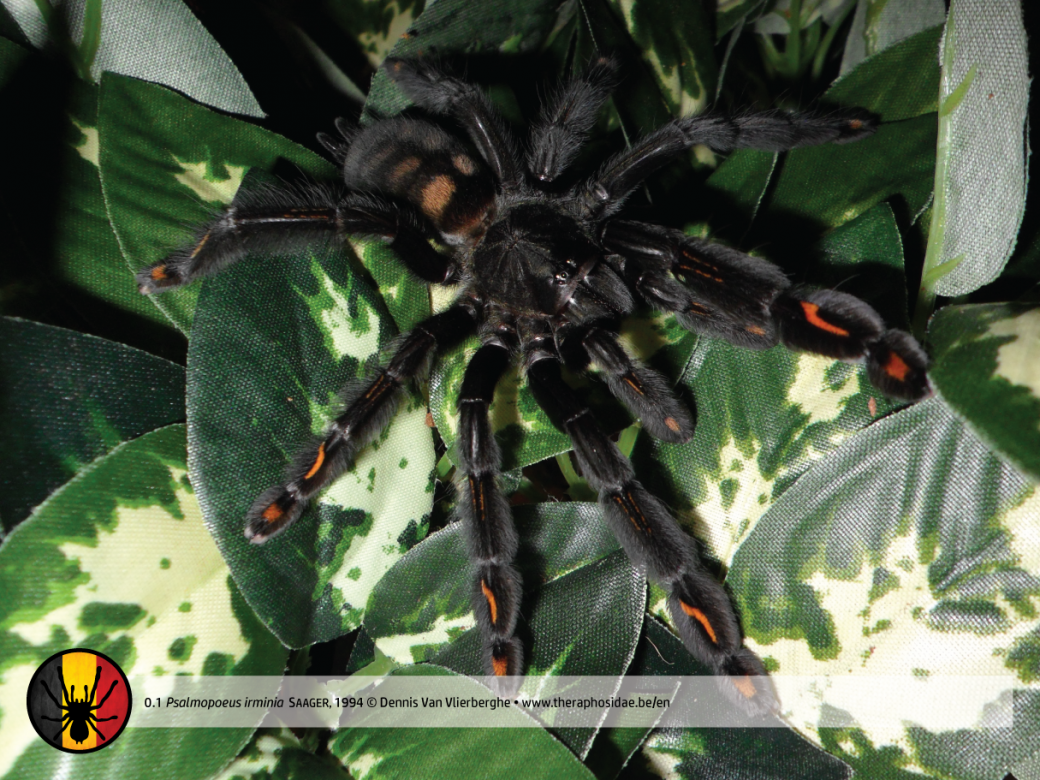 Psalmopoeus irminia Saager, 1994, also known as “Venezuelan sun tiger” or “Sun tiger”, is a beautiful tarantula due to its speed, pattern and behaviour from Venezuela. With the orange pattern on the abdomen, she’s a pleasure to watch. However she’s easy to keep, Psalmopoeus irminia can be fast and unpredictable. She was solely found in a dense region around the borders of Venezuela, Guyana and Brasil. The species, however, was encountered in 2016 in the Paracaíma region in Brasil, living 1m60 above the ground in a typical tubular web retreat. Climate and vegetation in this region is similar to the region as described by Saager in 1994, which explains her presence.

Venom: Depending the location of the bite and the amount of venom released, this might be a painful experience. However, no valuable scientific research has been done yet (bite report).

Behavior: The spider will try to flee at first, persistent provocation can result in multiple bites. Psalmopoeus irminia is notorious to being very defensive and unpredictable. Looking for an escape route, they’ve been seen falling and making little jumps. Psalmopoeus irminia makes a beautiful tubular web retreat.

Psalmopoeus irminia lives in tropical warm and humid area, with dense vegetation. Temperatures almost daily reach levels up to 30°C. Please be informed of the fact the spider will protect itself against the burning sun in tree crevices, hollow branches and leaves. Do not overheat the terrarium. Humidity drops from february until april. However they’re arboreal species, they can be found closer to the surface as well.

* During 6-9 months the spider lives in rather humid area. Note that cages with high humidity levels are very sensitive for mites and other parasites. Please take your precautions.

Black dot: Psalmopoeus irminia recently found in Brazil (2016). Vegetation and climate in the Paracaíma region is similar to the Northern region. 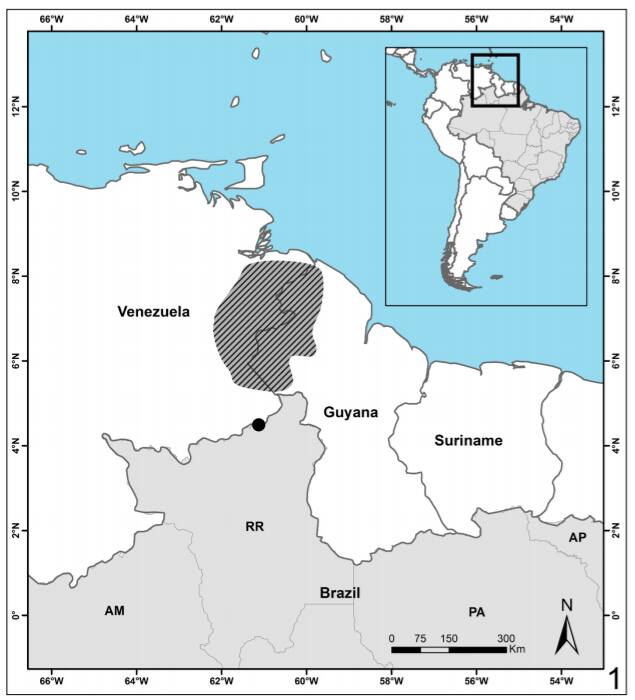 Mating the Psalmopoeus-genus normally runs smoothly. Male and female are sometimes kept together for several weeks. Cannibalism, however, might happen in these circumstances. If you decide to seperate male and female after mating, introduce the male 2/3 times a week. Stop this from the moment you’ve noticed the female responds rather agressive. This might be an indication at least one previous copulation was successful.

• Provide hiding places and an escaping route for the male.

• A few weeks after a successful mating the female won’t leave her burrow anymore. Don’t bother her at all.

• 1-5 months after mating Psalmopoeus irminia will start making her cocoon. Deprive the cocoon, when desired, 6 weeks later. Store the eggs at a humidity of 70% and a temperature of 26-29°C. Expect 100-150 spiderlings to come out.

• It’s not unusual that Psalmopoeus irminia creates a second cocoon 4 months after the first one. The amount of fertilized eggs will probably be less than the first cocoon (40-80). This, however, is not the rule.

• Psalmopoeus reduncus is the only one of the genus never producing a second cocoon?

• Psalmopoeus spp. is mainly distributed on the Western part of the continent. They are absent (or very rare) in other regions of South America?

• First record of the genus Psalmopoeus (Araneae, Theraphosidae) in Brazil.