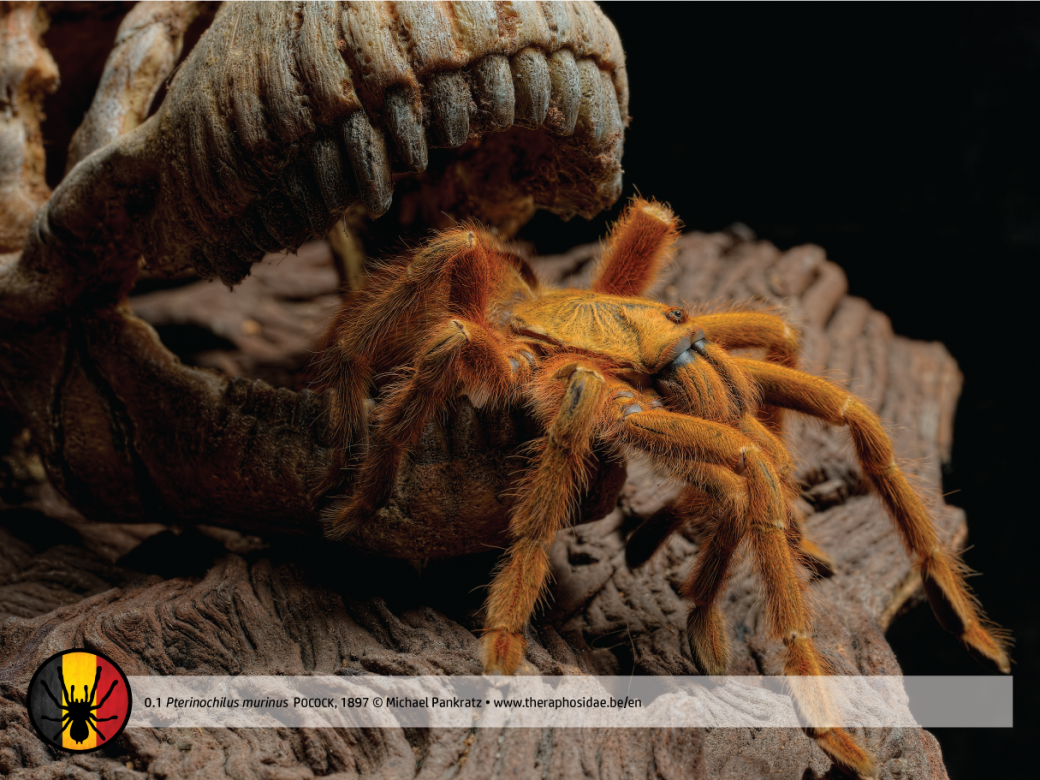 Pterinochilus murinus Pocock, 1897, also known as “Orange baboon tarantula”, abbreviated as “OBT”, “Mombasa Golden Starburst Tarantula”, “Usambara Baboon”, “Orange bitey thing” and “Pterror”, is a beautiful spider due to its coloration and behavior from Central-, East- and South-Africa. Pterinochilus belongs to the Harpactirinae, commonly known as the baboon spiders. When you hear people talk about “Harpactira elevata“, “Pterinochilus mamillatus” or “Pterinochilus hindei“, they’re having a conversation about Pterinochilus murinus. The bird spider is notorious for its speed, its neurotoxical venom and its defensive behavior. Colors can vary, depending location and surface, from gold-orange to reddish and even grey-black. You’ll notice plenty of people in the hobby specify variation by its color as following: “TCF” or typical color form, “RCF” or red color form (known as Pterinochilus sp. usambara, Pterinochilus spinifer, Pterinochilus mamillatus as well (source)), “UMV” or Usambara mountain variant, “SCF” or silver color form and “DCF” or dark color form.

Danniella Sherwood, a reputable taxonomist, states that “color forms in the pet trade are problematic and arbitrary terms. How red does a spider need to be to be categorized as “RCF” and how dark for “DCF”? How close to the colour of the type specimen must “TCF” be and is that before or after the alcohol browned it? I just hope we are able to convince everyone to label their wild stock by given locality, as that is a lot better than what has been going on for the last 20 years.”

Behavior: Don’t be fooled by her beauty, as she is very defensive. The spider will try to flee at first. Persistent provocation can result in a bite, something you don’t want to happen (source). Pterinochilus murinus is known to make very beautiful webs as well, equiped with lots of entries and a long, either invisible web on the surface to locate prey quickly as they grow older. The webbings are a true pleasure to watch.

In the South temperatures can be rather cool, around 18°C, with a warm season between 26-28°C. In the Zambezi-valley however, temperatures often reach up to 32-35°C. Please be informed of the fact the spider will protect itself against the weather underneath tree trunks, rocks, human structures and abandoned holes of rodents, creating a thick web in forests, savannas and deserts (source). Temperatures in their burrows differ from environmental temperatures.

Because of the fact Pterinochilus murinus lives widely spread across Central-, East- and South-Africa, chosing one specific place could create a false impression. In Western terraria, however, Kenyan and Tanzanian variant is mostly being found. Please ensure environmental factors as described above.

However Pterinochilus murinus is known to be very defensive towards any disturbance nearby, they surprisingly accept the presence of a partner for a short period of time nearby. It’s not uncommon the male moves in with his lady for a few days. Before you’re seeing the romance in this, know there are plenty of tough females ready for their next male-snack as well. Therefore it’s better to seperate male and female immediately after mating, but introduce him a few consecutive days, keeping the female well-fed during the process.

• The female will start making the cocoon 2-3 months after mating. Deprive the cocoon, when desired, 4 weeks later. Store the eggs at a humidity of 70% and a temperature of 24-28°C. Expect 75-150 spiderlings to come out.

• Pterinochilus murinus sometimes creates a second cocoon 8 weeks after the first one. The amount of fertilized eggs will probably be less than the first cocoon.

• “murinus” in Pterinochilus murinus stands for “mouse”? Now you know what’s on her menu once in a while…

• Pterinochilus murinus is so fast people joke she can teleport?

• Pterinochilus murinus is often called “Orange bitey thing” or “Pterror”, because of her defensive behavior?

• Pterinochilus murinus is, unbelievable but true, often recommended as the perfect spider for beginning hobbyists? I don’t think so!