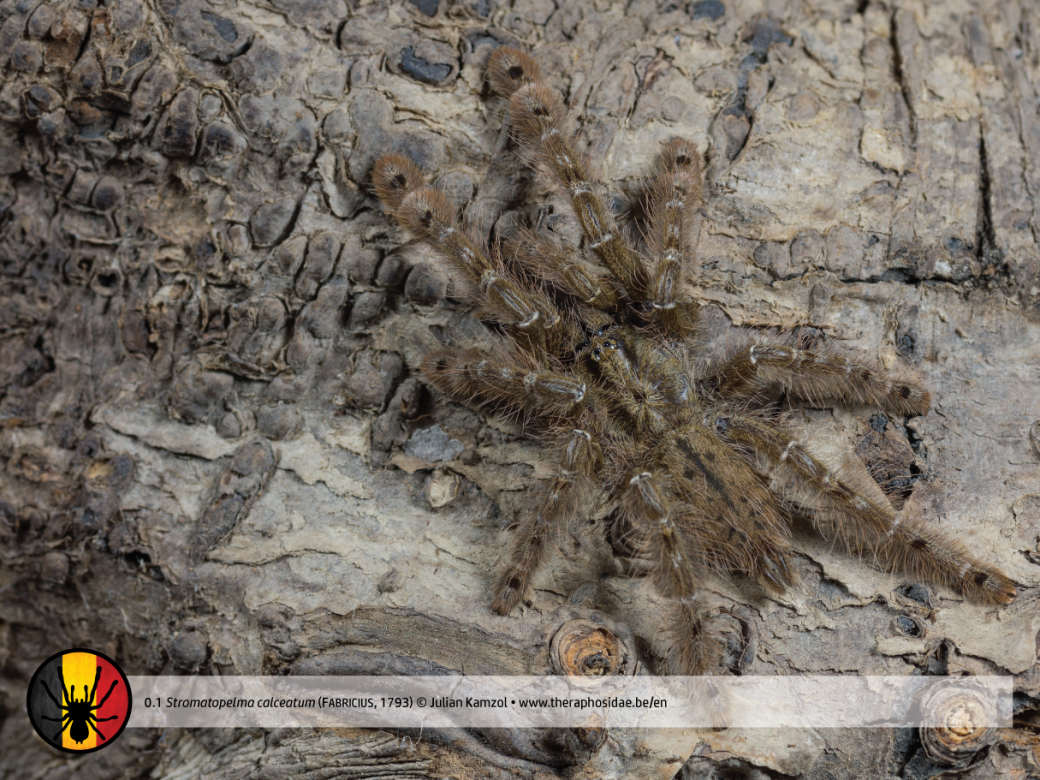 Stromatopelma calceatum (Fabricius/1793), also known as the “Featherleg baboon”, is a very stunning and remarkable bird spider due to its coloration and patterns from West-Africa. However she’s been linked with baboon spiders, she belonged to the subfamily of the Stromatopelminae (and not the Harpactirinae) for a long time. African theraphosids are commonly given the title of baboon spider, which explains why she carries the name. Since March 2017 the spider belongs to the subfamily of the Aviculariinae. Based on a fragmentary species from Guinea, Fabricius described the spider as “Aranea calceata” in 1793, later to be removed into the genus Scodra by Becker in 1879. This name was accepted for many years, until Raven discovered in 1984 the generic name Scodra was already in use in by an earlier butterfly genus. In their natural habitat Stromatopelma spp. will create a crude tube web in the higher regions of ferns and palm trees in the lower forest regions. Due to the fact there is a colour difference of calceata specimens centred on Pepeh, Sierra Leone, Stromatopelma calceatum griseipes (Pocock/1897) became a subspecies of Stromatopelma calceatum by Smith since 1990.

Venom: Probably strong. Depending the location of the bite and the amount of venom released, this might be a painful experience. Bite reports from captivity convey that the venom of Stromatopelma calceatum is medically significant to humans. However, no valuable scientific research has been done yet.

Behavior: Very defensive. The spider will try to flee at first. Persistent provocation can result in a bite. Younger spiders of the species have been observed burrowing themselves, after which they’ll be looking out for shelter in higher places, sometimes creating a very beautiful web. When given the perfect housing, as supposed, they’ll only be visible at night.

Stromatopelma calceatum lives in tropical warm and humid area. Temperatures almost daily reach levels up to 30°C. The intense sunlight isn’t a big issue due to the treetops, but the spider will protect itself against the heat by creating a crude tube web in the higher regions of ferns and palm trees in the lower forest regions. They were seen living in palm clumps as well. Do not overheat the terrarium. From november until march the Harmattan brings a cold-dry and dusty wind from the Sahara over the West-African subcontinent. Both temperature and humidity drop for 4-5 consecutive months.

* Wild vegetation in the lower region of the terrarium is recommended.

* During 7-8 months the spider lives in humid area. Note that cages with high humidity levels are very sensitive for mites. Please take your precautions.

* Note: Stromatopelma calceatum lives widely distributed in West-Africa. These data are only informative. Please provide environmental factors as described above.

• Plan mating during dry season or at the end of wet season. From the moment you systematically raise up humidity, you might trigger the female.

• 2-4 months after mating, the female will probably start making the cocoon. Deprive the cocoon, which is recommended, 5 weeks later. Store the eggs at a humidity of 80-90% and a temperature of 25-29°C. Expect 200-300 spiderlings to come out.

• Keep an eye on the cocoon as long as you leave it with the female. Stromatopelma calceatum is notorious to defend her cocoon, but not taking care of it.

• The genus Scodra had to be removed due to the fact the genus was already occupied by a family of butterflies?

• A female Stromatopelma calceatum will typically attach her cocoon to one of the walls of her burrow?

• A female Stromatopelma calceatum will defend her cocoon, but is notoriouos for not taking little care on it?

• Stromatopelma calceatum shares its habitat with Heteroscodra maculata? Click on the photo or here for another version. For more information sheets, click here. 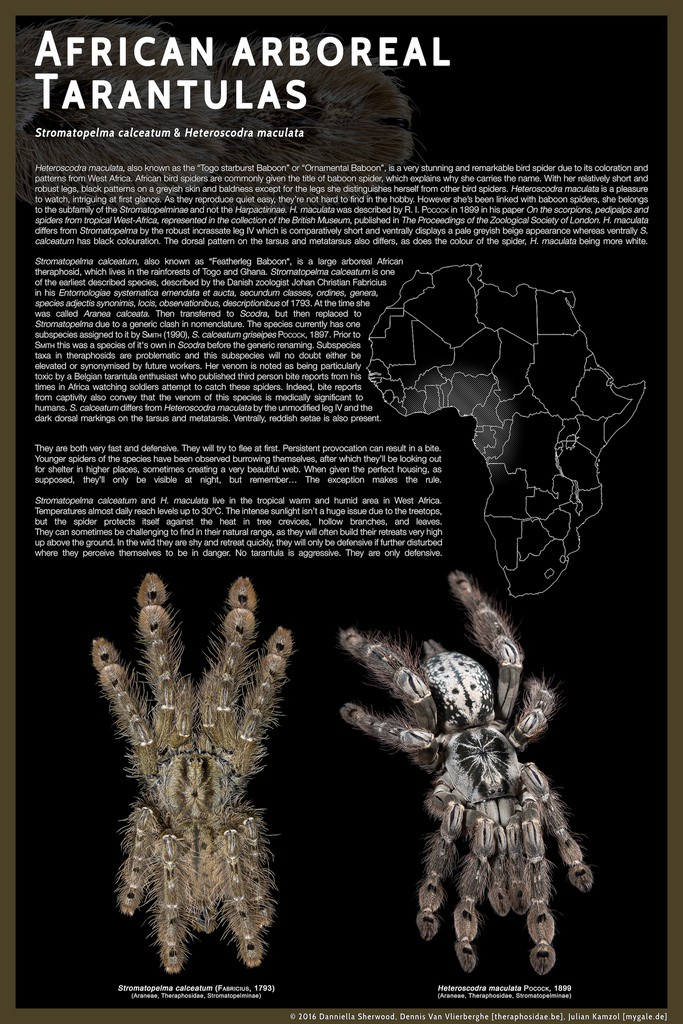