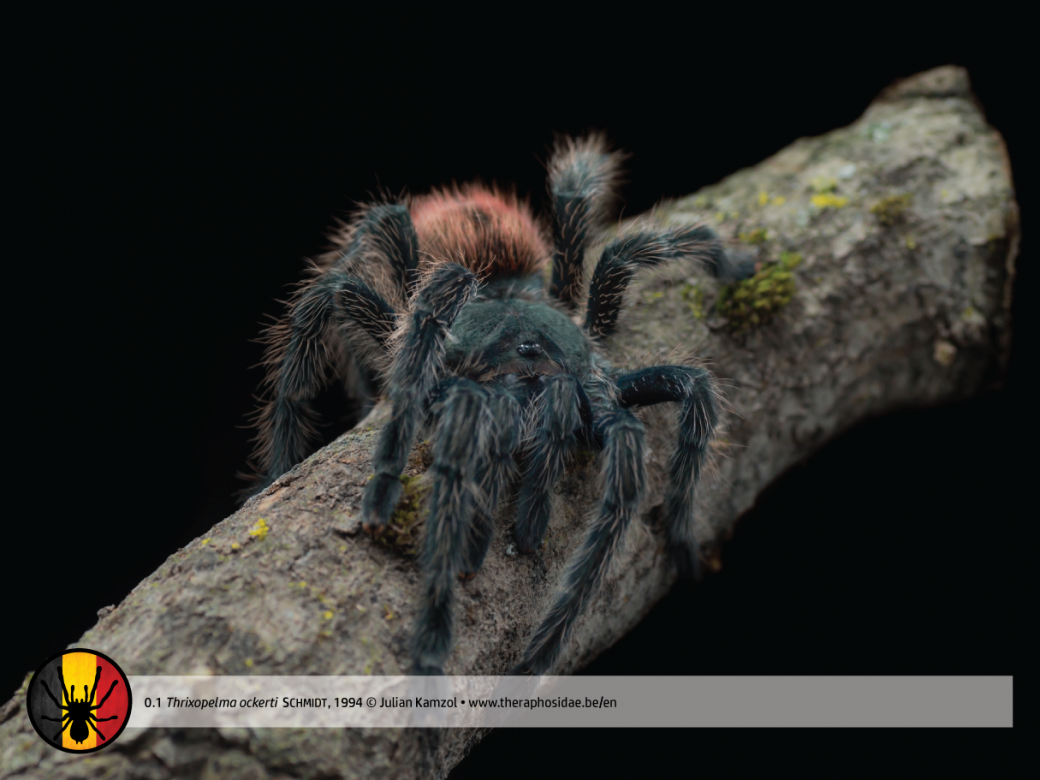 Thrixopelma ockerti Schmidt, 1994, also known as “Flame rump tree spider” or “Peru flame rump”, is a beautiful bird spiders due to its coloration and behavior from Peru. The rather dull colors at early age become more vibrant while growing up, showing an overall dark green/blue coloration with bright pink abdominal setae. Thrixopelma ockerti was first described in 1994 by Schmidt since when she never had a namechange. In European terraria she’s rather the exception than the rule, but nevertheless a wonderful creature to care for.

Venom: Probably weak. No scientific research has been done yet.

Growth rate: Fast. Females can grow up to 4,5cm and mature within 2 years. Nevertheless breedings with females above 5,5cm were more successful.

Life expectancy: Females live up to 15 years old. Males are given a shorter lifetime of 3-4 jaar.

Behavior: Remarkable about Thrixopelma ockerti is that she will push her cephalothorax against the surface with the abdomen pointing upwards being distrubed, different than the typical threat pose, ready to bomb a nice dose of urticating hairs towards the troublemaker. They’re not the most docile species from the New world, but except for those irritating setae, you don’t have to fear a bite. Thrixopelma ockerti can be considered a pet rock, visible plenty of times. In the wild she’s been found communal, but not recommended in captivity.

Thrixopelma ockerti lives in tropical warm and humid area. Temperatures almost daily reach levels up to 30°C. Please be informed of the fact the spider will protect itself against the burning sun in tree crevices, hollow branches and leaves. Do not overheat the terrarium. Rainfalls in Pacullpa can be very intense. Most rain falls from october until november, while temperatures drop a few degrees. Very moist substrate from time to time is good for the spider, but make sure no moldproblems occur.

* Keep substrate moist. The semi-arboreal lifestyle of Thrixopelma ockerti is being considered to be a result of regional floodings.

Dry season: None. July is with “only” 12 days of rain the driest month of the year.

Coldest month: During rainy season, from october until december, avarge temperature drops a few degrees. July is with an absolute minimum of 19°C the coldest month of the year.

* You might like to consider an adjustment of these data with your local climate. Do not exceed minima or maxima and, if necessary, organize the year making your bird spider experience different seasons. This is very important form the moment you’d like to start breedi

Pairing a Thrixopelma ockerti does not always run smoothly and might take a lot of time. From the moment you introduce the male, he will probably show very cautious attitude. Answer this behavior with patience, lots of patience. The male will probably need more chanses in order to be successful once. A breeding report.

• The female will start making the cocoon 1-3 months after mating. Deprive the cocoon, when desired, 4 weeks later. Store the eggs at a humidity of 70% and a temperature of 25-29°C. Numbers may vary from 100-200 spiderlings.

• Thrixopelma ockerti have been found living communal in the wild?

• Thrixopelma ockerti is probably living a semi-arboreal lifestyle due to frequent local floodings?

• Thrixopelma ockerti is being named after the collector of the species, Roland Ockert?