Imagine… “You feel the pressure on your skin increasing from within. In need of fluids you experience loss of appetite. You’re so irritable, every change in your environment makes your stress reach unprecedented levels. You have no energy, rather staying at home in stead of enjoying life. You’re waiting day after day, week after week, preparing yourself for that one lifechanging moment you decide to rip your skin of. You’re doing everything to start the proces, making little movements, not too hasty nor too slow. Once started you experience the outer world, being considered more dead than alive, knowing there is no way back. Some time later you’re lying there, impressed of what just happened, looking at the new you. With your old jacket next to you, you’re standing up, trying to be threatening but vulnerable as never before…”

However it might be a little bit exaggerated, you are lucky! You have bones, muscles and a soft skin being able to grow gradually without noticing. Our beloved tarantulas are less fortunate. Overall, their skin is hard, functioning as armor and protecting them against extreme weather conditions, needing soft phases in life in order to be able to grow. Therefore bird spiders need to molt and go through the process several times in their lifetimes. Younger spiders will molt in a short period of time, such as every 2-3 months, while older species will take much more time to start the process all over again. From the moment a next molt is coming up, you’ll notice your spider change his/her behavior. They’ll refuse prey and be less active or visible. They’ll plenty of times stay inside their burrows, sometimes for weeks, without giving you any signs of life. Finding the rest they need, on physiological level the molting process is being introduced (apolysis) by body fluids and enzymes, seperating the old skin from the new one. The more this phase is done, bird spiders with a bald abdomen will show a grey (almost black) spot. Little time before molting process (ecdysis) terrestrial bird spiders will make a small “webcarpet”  on which they will go through their molt. Spiders from the new world will probably add urticating hairs, defending themselves against unwanted guests. Bird spiders will mostly molt on their back, but doesn’t need to be, as arboreal bird spiders will probably molt in their cocoon-shaped burrow while holding themselves on to the cocoon. From the moment the spider took position, they’ll actively rip the 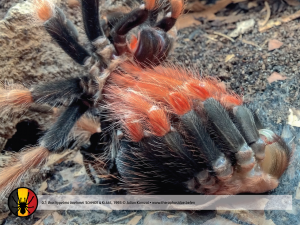 cephalothorax, using their chelicerae to tear it apart until the end of the abdomen. After getting rid of the skin, pushing legs and abdomen out of it, the spider will take position trying to form a threat, but it’s vulnerable as never before. The new skin still needs to harden up and the fangs are not useful yet. Once the fangs got their normal color in stead of white, they’re able to use them again. As the spider is aging, molting process will take more time. Little ones can tear it of in 30 minutes, while big adults may need up to 24 hours, and sometimes more…

Important for the hobbyist

• Increase humidity during pre-molt, but keep aiming for conditions around their natural environmental factors. Foresee a water bowl with fresh water.

• Pre-molt can last months. The spider might hide herself for months, reject prey and/or change in her normal behaviour. Don’t panic. This is normal.

• Do not disturb the spider. Do not give prey if molt is near. Any stress might cause a bad molt, making him/her lose a leg or even die.

• Don’t feed younger spider for 1 week after molting. Wait up to 2 weeks before feeding (sub-)adults.

• If a female molts between a successful mating and cocoon, she’ll leave the eggs unfertilized.

• Once adult, males will not molt again. They might die trying. Adult males are recognizable by their pedipalp bulbs. Some exceptions survive a postultimate molt. Bulbusses (and tibial hooks) will disappear. He will not be able to mate again.

Experienced hobbyists are able to make a calculated guess whether or not a bird spider is about to molt, or not. This is important, knowing that your pet is able to show different behavior for other reasons as well. Keep a log and check for a dark grey spot on the (bald) abdomen of the new world tarantula. Check for a change in their behavior, as they will reject prey and shield themselves from the outside world, being deep inside their burrow most of the time.

Females often reach ages from 15 up to 30 years old. They’ll molt their entire lifetime, even after they reached their “maximum size”. Males, however, die much younger, because they won’t molt anymore after reaching adulthood. Keeping this in mind you might suspect a rather fast growing spiderling, compared with the others from the same cocoon, is probably male… NB: While males reach adulthood before females, they might have died already before the females of the same cocoon reach adulthood. It is known that the males of some cannibalistic species, such as Argiope bruennichi (no bird spider), prefer to mate their own sister in order raise the odds of survival. On the other hand, there is still very little known about inbreeding. Some claim it causes a major decline in fecundity and hatching rate of eggs (source). However, not everybody agrees. Many hobbyists firmly believe inbreeding has no consequences for (the future of) the bird spiders. It is clear lots of hobbyists, myself included, are patiently waiting a science-based answer on this. Is there somebody with a “little” time, money and knowledge?