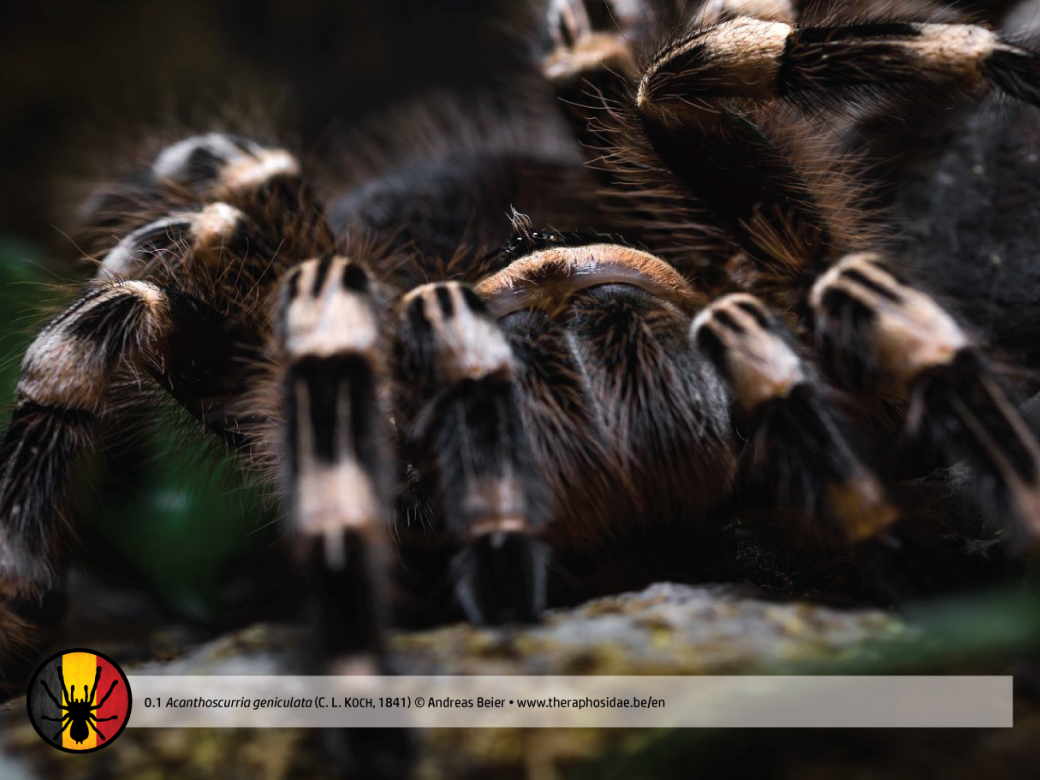 Acanthoscurria geniculata (C. L. Koch, 1841), also known as “Giant whiteknee”, “Brazilian whiteknee tarantula” and “Whitebanded tarantula”, is an astonising bird spider due to its coloration, pattern and behavior from Brazil. She furiously hunts down her prey, going straight for the kill. You’ll sometimes hear people talk about Acanthoscurria transamazonica, which is being used as a synonym for the same spider. Acanthoscurria geniculata is high on many favorite-lists. Beginners sometimes confuse her with Nhandu chromatus.

Behavior: Nervous. The spider will not hesitate to shed its urticating setae in your direction. Urticating setae of Acanthoscurria geniculata are remarkably effective against mammals, especially in the eyes and/or inhalation. However a bite is the second defensive system, she’ll furiously attack any disturbance. Prey will only be rejected when in pre-molt or unstable environmental factors.

Life expectancy: Females can become up to 20 years old. Males are given a shorter lifetime around 4 years.

Acanthoscurria geniculata lives in the tropical humid and warm rainforests of Brazil. Temperatures almost daily reach levels 30°C. Please be informed of the fact the spider will protect itself against the burning sun underneath tree trunks, branches, leaves and abandoned burrows. Do not overheat the terrarium.

Mating the Acanthoscurria-genus normally runs smoothly. The females, however, have been seen both docile and very defensive towards their men.

• The spider often like to burrow themselves after pairing. Do not deprive her this opportunity in your terrarium. Provide 1x span width of substrate.

• Make humidity drop (60-70%) for 3 months after mating. Systematically raise up humidity to 80%. This will trigger the female to start making the cocoon.

• The female will start making the cocoon 4-7 months after mating, containing probably 600-1000 fertilized eggs. Cocoons with more than 1000 eggs is no rarity (source). Deprive the cocoon, when desired, 6 weeks later. Store the eggs at a humidity of 80-90% and a temperature of 25-28°C.

• On the Brazilian Amazonian species of Acanthoscurria (Araneae: Theraphosidae).