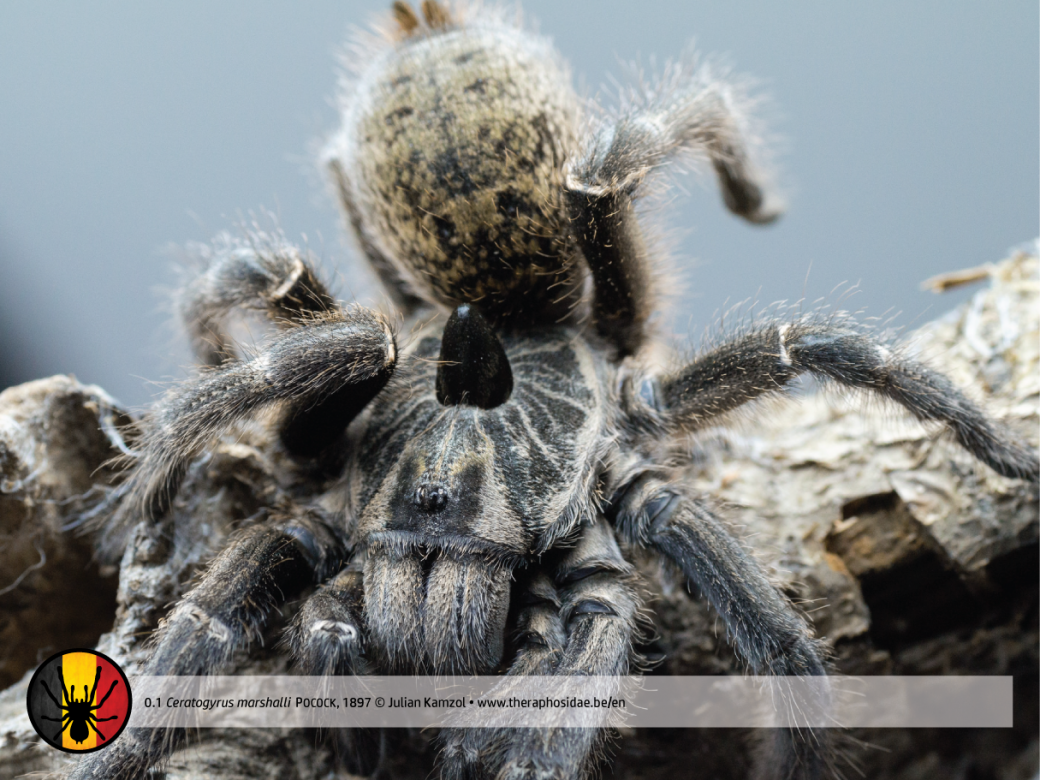 Ceratogyrus marshalli Pocock, 1897, also known as “Straight horned baboon” or “Great horned baboon”, is a very beautiful bird spider due to its remarkable horn on the centre of her carapace from Zimbabwe and Mozambique. African bird spiders are commonly given the title of baboon spider, which title theoretically only belongs to the subfamily of the Harpactirinae. Therefore Ceratogyrus can be considered a real baboon spider. Ceratogyrus darlingi was the first species of the genus to be discribed in 1897, together with the male Ceratogyrus marshalli. De Wet & Dippenaar-Schoeman were able to describe Ceratogyrus cornuatus in 1991, which turned out later to be the female Ceratogyrus marshalli. The Ceratogyrus-genus is well known for their beautiful horns, but in fact only half of the genus is blessed with it. Except for Ceratogyrus paulseni, however, all species do have a subabdominal band in the booklung region.

Life expectancy: Females become up to 8-10 years old. Males are given a shorter lifetime of 3-4 years.

Behavior: Ceratogyrus marshalli is a very defensive and unpredictable bird spider. The spider will try to flee at first. Persistent provocation will probably result in stridulation and a bite. She’ll make herself a J-shaped burrow deep underground. At broad daylight she’ll stay deep inside her burrow, waiting for an unsuspecting prey at the entrance of her burrow at night. Ceratogyrus marshalli can be considered a pet hole, so know what to expect when buying.

Ceratogyrus marshalli is originally inhabited in Harare, Zimbabwe. Due to the fact this city is located about 1500m above sea level, maximum temperatures are fairly constant. Winter enlasts 7 months and is rather cool and dry. The following 5 months, summer, it is rather warm and humid.

* During rainy season (5 months) the spider lives in wet area. Note that cages with high humidity levels are very sensitive for mites and other parasites. Please take your precautions.

Differences between the horns of the Ceratogyrus-genus

Until today it is still unknown why these horns could have a positive impact on the lives of the tarantulas. Anatomically, the horn is located on top of the fovea. Underneath the fovea, inside the tarantula, the dorsal dilator muscle is attached to the apodeme. Different to all other bird spider the apodeme of the horned Ceratogyrus-species is ringshaped. The increased surface for the attachment of the dilator muscles, inside the horn, could aid in drawing in liquified food into the sucking stomach. On the other hand the increased surface could serve as storage area to survive periods of extreme drought and lack of food (Rick C. West/1986).

Male: Similar to protuberance of Ceratogyrus sanderi, but wider than long.

An unknown species from South Africa was discovered. This species shows a conical horn facing backwards, so big that it extends the abdomen (click here for a picture).

Pairings with the Ceratogyrus-genus don’t always run smoothly. Due to the fact both spiders are very timid, it might take a while before you’ll notice some action. In some cases the male has been seen running away before any copulation happened. Cannibalism occurs from time to time, but is not the rule. In order to be successfull breeding with the Ceratogyrus-genus it is very important to provide enough substrate. Breeding projects.

• Plan mating by a humidity of 50-60%, keeping temperatures fairly constant around 25°C.

• Spray the enclosure 1x/week on the glass (not the web) in the following weeks. Don’t do anything special.

• The female will start making the cocoon 1-2 months after mating. Some breeders cover the terrarium with a towel for 1 month. Deprive the cocoon, when desired, 4 weeks after you’ve seen her making it. Store the eggs at a humidity of 70% and a temperature of 26-29°C. Expect 120-180 spiderlings to come out. Plenty of breeders leave the little ones with mommy until nymph II.

• From the moment nymphs upgraded to spiderling, they will start to attack each other within a few hours. Make sure you seperate them before this happens.

• Bird spiders from the subfamily of the Harpactirinae are given the name “baboonspiders” because their legs resemble baboon fingers?

• The horn of Ceratogyrus marshalli is the only vertical one?

• There are 2, almost transparant, lines on the horn?

• Horns are only visible as protuberances from the 4th molt? The exception, however, makes the rule. The horn of Ceratogyrus brachycephalus starts showing up from 2nd molt.

• A new species of theraphosid spider from Southern Africa (Araneae, Theraphosidae, Harpactirinae) with distributional notes on other harpactirines.