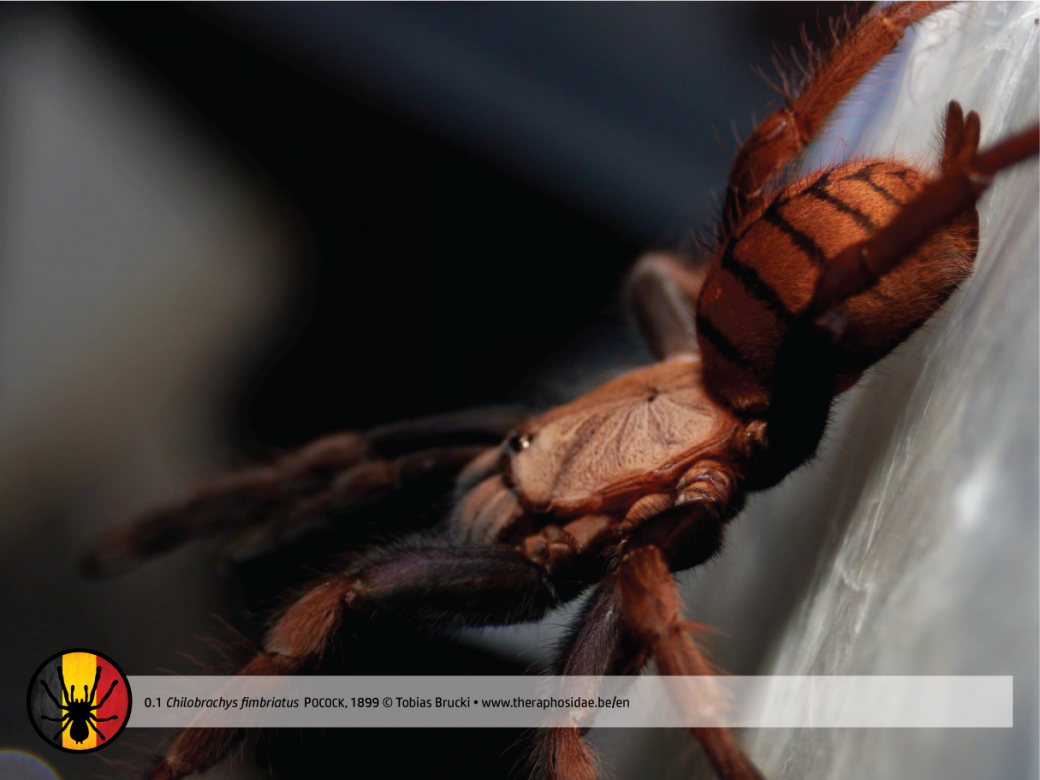 Chilobrachys fimbriatus Pocock, 1899, also known as “Indian violet (earth tiger)”, is a wonderful bird spider due to its coloration, pattern and webbing from India. She’s considered to be the most beautiful of the Chilobrachys-genus. For this reason the species has been smuggled a lot, mainly to Europe and America. In order to save the species, please don’t buy wild caught Chilobrachys fimbriatus, but get them from successful breeders.

Venom: Depending the location of the bite and the amount of venom released, this might be a painful experience. However, no valuable scientific research has been done yet.

Behavior: Nervous and defensive. The spider will try to flee at first. Persistent provocation can result in a bite. The Chilobrachys-genus is known to create beautiful webs and a tunnelsystem below the surface. At broad daylight she’ll stay deep inside her burrow, waiting for an unsuspecting prey at the entrance of her burrow at night. When older, you’ll see them more out in the open.

Life expectancy: Females become up to 20-25 years old. Males are given a shorter lifetime up to 5 years, which is rather old for a male bird spider.

Chilobrachys fimbriatus lives in tropical area with a monsoon period. It’s rather dry throughout the year with fairly constant humidity and temperature. In June, July and August precipitation can last for hours, even days, introduced by unpleasant high humidity levels a few months before. Temperatures often reach 30°C. Please be informed of the fact the spider will protect itself against the sun making a burrow deep in the ground. Do not overheat the terrarium.

* A few months before monsoon humidity reaches rather unpleasant levels. Spray the terrarium daily for a few weeks, without leaving the substrate drenched.

• Plan the pairing at the end of wet season and let the cage dry out for 3 months, while temperatures drop to 22/24°C. Systematically raise up temperature and humidity. This will trigger the female to start making the cocoon.

• 4 months after mating (a few weeks after introducing spring), the female will start making her cocoon. Deprive the cocoon, when desired, 4 weeks later. Store the eggs in the incubator at 26-29°C and a humidity of 75-90%. Expect 150-250 spiderlings to come out.