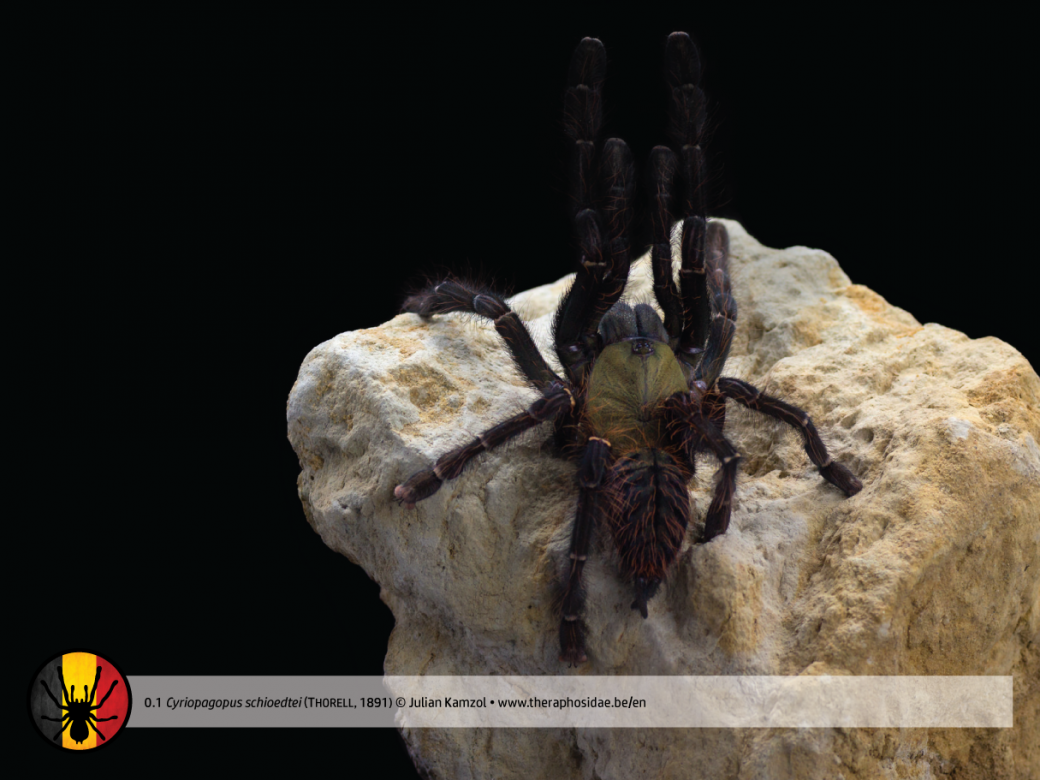 Omothymus schioedtei (Thorell, 1891), also known as “Malaysian Earth Tiger”, is a very beautiful bird spider due to its size, behavior and coloration from Malaysia. The “tiger” in her name refers to the remarkable and intermittent pattern on her abdomen, which is different than, for example, Cyriopagopus sp. Sumatran tiger. The legs are very robust and the carapace can grow up to 3cm. The male is olive green with faint yellow leg striation, possessing long slender legs and a blunt tibial apophysis once mature. The subfamily of the Ornithoctoninae (known as “earth tigers”, due to the patterns on their abdomen) mostly consists burrowing bird spiders living deep underground, except for spiders of the Cyriopagopus– and Phormingochilus-genus. The spiders are very timid and occasionally visible at night. Similar to the burrowing bird spiders from the Ornithoctoninae-subfamily Cyriopagopus spp. often creates a tunnel system underground. The authors, Smith & Jacobi, concluded in their revision of the Phormingochilus-genus (2015) that Cyriopagopus is a senior synonym of the genus Haplopelma Simon, 1892 and that the genus Omothymus needs to be restored to house the arboreal Malaysian mainland species schioedtei (Thorell, 1891) and thorelli (Simon, 1901), which were formerly assigned to the genus Cyriopagopus but have now been restored to their original placement. Awaiting further investigation, lots of hobbyists are not (yet) following these changes, which is the reason why you’ll see this spider show up as “Cyriopagopus schioedtei” and “Omothymus schioedtei“.

Origin: In the primary lowlands and foothill monsoon forests of the northern states and the off coast island of Kedah, Langkawi and Penang of Peninsular Malaysia.

Life expectancy: Females become up to 14-15 years old. Some say they’ll reacht ages up to 20 years old, but this is rather unlikely. Males are given a shorter lifetime of 3-4 years.

Behavior: Because of the fact Omothymus schioedtei is a very timid bird spider, they might react very defensive towards every disturbance nearby. Adult version live high in the trees, while their younger brothers and sisters live closer to the surface between rocks, stones or even lower, adding terrestrial prey to their menu.

Omothymus schioedtei lives in tropical humid and warm area. Both temperature and humidity are fairly constant throughout the year, with a small and more “dry” period from january until march. Temperatures almost daily reach levels up to 30°C. Please be informed of the fact the spider will protect itself against the burning sun in tree crevices, hollow branches, leaves and buildings. Do not overheat the terrarium. During monsoon very moist substrate from time to time is good for spiders of the Cyriopagopus-genus, but make sure no moldproblems occur. Penang often welcomes dusty winds from Indonasia creating a hazy effect. Due to the fact it’s surroundad by the Andaman Sea, this effect is less noticeable in Langkawi.

Wet season: All year long. Throughout the year it rains 1 out of 2 or 2 out of 3 days, sometimes drying up for a few weeks.

Dry season: None. Only from january until march there are less precipitation days.

Warmest months: None. Throughout the whole year 30°C (and more).

Coldest month: None. The coldest month don’t differ that much from the other months. Temperatures at night don’t drop underneath 20°C.

Pairings with the Omothymus-genus doesn’t always run smoothly. In his quest for posterity, the male will show his presence relatively quick, luring the female out of her burrow. Leaving her castle she’ll probably react very aggressive/defensive towards the male, either looking for a next meal or a quick copulation. I’ve been told that if the man dies after a copulation it’s a good indication to think the copulation was successful. This however, remains a hypothesys.

• Provide an escaping route for the male.

• Plan the pairing at the end of wet season and let the cage dry out for 2/3 months, while temperatures drop to 22/23°C. Systematically raise up temperature and humidity. This will trigger the female to start making the cocoon.

• Arm yourself with long greased tweezers. Seperate male and female immediately after mating

• From the moment you start introducing spring the female will make the cocoon. Deprive the cocoon, when desired, 6 weeks later. Store the eggs at a humidity of 95% and a temperature of 26°C. Expect 100-150 spiderlings to come out.

• “Cyriopagopus” was validly published for the first time in 1891 by the Swedish arachnologist Tamerlan Thorell?

• Revision of the genus Phormingochilus (Aranea, Theraphosidae, Ornithoctonae) with the description of 3 new species from Sulawesi and Sarawak and notes on the placement of the genera Cyriopagopus, Lampropelma and Omothymus.