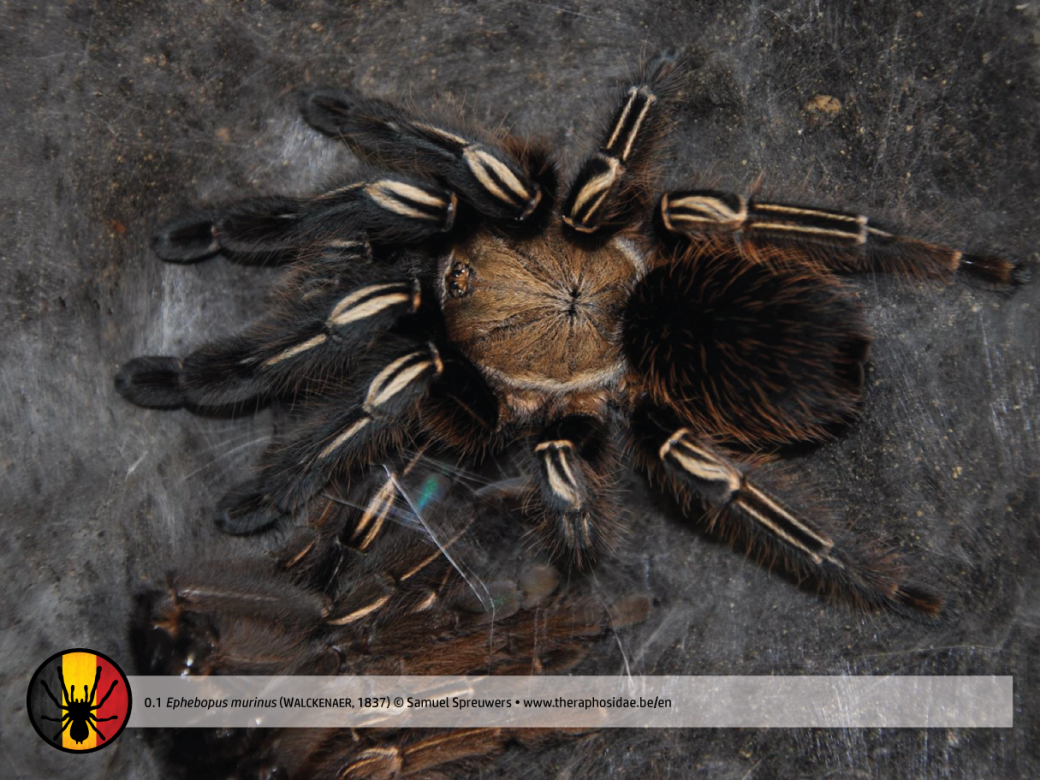 Ephebopus murinus (Walckenaer, 1837), also known as “Yellow knee skeleton” and “Skeleton tarantula”, is a very remarkable bird spider due to its skeleton pattern on the legs from Brazil. The genus belongs to the subfamily of the Aviculariinae, mostly consisting arboreal bird spiders. Species from the Ephebopus-genus however, except for Ephebopus rufescens, are known to be burrowing bird spiders. Spiderlings from the genus have been observed living semi-arboreal (more info). Contrary to other new world tarantulas, Ephebopus is being armed with urticating setae on pedipalps and femura and not on the abdomen.

Behavior: Ephebopus murinus is very nervous, defensive and (at younger ages) at fast as lightning. The spider will try to flee at first. Persistent provocation can result in use of urticating setae or a bite. The spider will dig a burrow underground, not as deep as other burrowing species, fortifying the entrance with whatever she can find a few centimeters above the surface. When given a good setup with a few anchor points, you might expect a beautiful web. More information about their behavior: Click here.

Ephebopus murinus lives in tropical humid area. Both temperatures and humidity are fairly constant throughout the year. Temperatures almost daily reach levels up to 30°C. Please be informed of the fact the spider will protect itself against the sun making a burrow underground. Do not overheat the terrarium.

* As they get older, they’ll be out more. Provide enough surface.

* The spider lives in forests. She’ll fortify the entrance of her burrow with leaves and branches.

* Throughout the year the spider lives in wet area. Note that cages with high humidity levels are very sensitive for mites and other parasites. Please take your precautions.

Mating the Ephebopus-genus normally runs smoothly. Male and female are sometimes kept together for 2 weeks. After introducing the male, the spiders will take quiet a long time feeling each other. When copulation is done, the female will retreat in her burrow, probably not attacking the male. Introduce the male more than once, every 2 days, or leave them together up to 2 weeks. In this last scenario cannibalism may occur.

• Provide hiding places for the male when you decide to leave them together.

• It’s not unusual that spiders of the Ephebopus-genus create a second cocoon a few months after the first one (Hooijer/2002). The amount of fertilized eggs will probably be less than the first cocoon.

• Spiderlings can be kept communal for a few months. Provide a correct amount of food in order to prevent cannibalism. Seperate them after 2-3 months.

• The Ephebopus-genus has urticating setae on pedipalps and femura and not on the abdomen. This is very uncommon.

• There is a Ephebopus murinus “dark form” as well? “Common form” males will refuse to mate with “dark form” females (Hooijer).

• Review and clasistic analysis of the Neotropical tarantula genus Ephebopus Simon 1892 (Araneae: Theraphosidae) with notes on the Aviculariinae.

• The Brazilian species of the spider genus Ephebopus Simon 1892 with description of E. uatunam e. sp.

• The genus Ephebopus Simon 1892. Description of the male of Ephebopus murinus (Walckenaer), 1837.