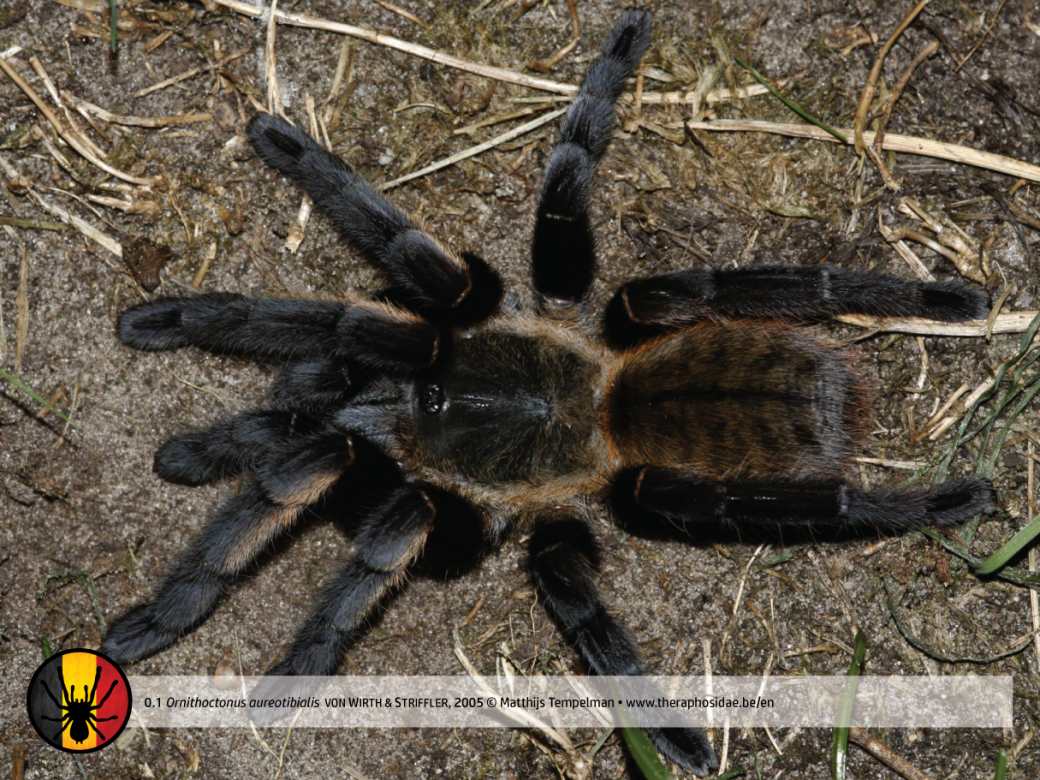 Ornithoctonus aureotibialis von Wirth & Striffler, 2005, also known as the “Thailand golden fringe”, is a very stunning and remarkable bird spider due to its behavior and coloration from Thailand, Myanmar and Malaysia. At the level of the patella the deep black femura are being seperated from the dark grey legs by a ring. On the retrolateral side of the first 2 legpairs patella and tibia possess beautiful golden/yellow hairs, which is the reason why she’s given both scientific and common name. Ornithoctonus aureotibialis was known in the hobby for a long time as Haplopelma sp. aureopilosum, after which she’s been baptized to Haplopelma chrysothrix by Schmidt & Samm in 2005. This name, however, was declared invalid (source). The subfamily of the Ornithoctoninae (known as “earth tigers”, due to the patterns on their abdomen) mostly consists burrowing bird spiders living deep underground, except for spiders of the Cyriopagopus– and Phormingochilus-genus. The spiders are very timid and occasionally visible at night.

Behavior: The spider will try to flee at first. Persistent provocation can result in a bite. She’ll dig a very beautiful vertical tunnel towards her burrow deep underground, fortifying the entrance with whatever she can find a few centimeters above the surface. At broad daylight she’ll stay deep inside her burrow, waiting for an unsuspecting prey at the entrance of her burrow at night. Ornithoctonus aureotibialis can be considered a pet hole, so know what to expect when buying.

Ornithoctonus aureotibialis lives in tropical warm area, with wet and dry periods. Temperatures almost daily reach levels up to 30°C, with heat waves up to 35°C during the warmest months. Please be informed of the fact the spider will protect itself against the burning sun making a burrow deep in the ground. Do not overheat the terrarium. Humidity drops significantly from November until February, compared to what’s normal for the region. 90% of total annual rainfall happens between may and october.

* During rainy season (6 months) the spider lives in wet area. Note that cages with high humidity levels are very sensitive for mites and other parasites. Please take your precautions.

Coldest months: None. The coldest month doesn’t differ that much from the other months.

Pairings with the Ornithoctonus-genus don’t always run smoothly. In his quest for posterity, the male will show his presence relatively quick, luring the female out of her burrow. Leaving her castle she’ll probably react very aggressive/defensive towards the male, either looking for a next meal or a quick copulation. Lots of breeders have reported a very offensive male, almost raping his lady.

• Plan the pairing at the end of wet season and let the cage dry out for 2-3 months. Systematically raise up humidity.

• “Aureotibialis” stands for “golden tibia”, referring to the gold/yellow area on the retrolateral side of the tibia of the first 2 legpairs?

• Ornithoctonus aureotibialis in their natural habitat often make burrows up to 2 meters deep?

• The tibial hooks on mature males are rather blunt projections than real hooks?