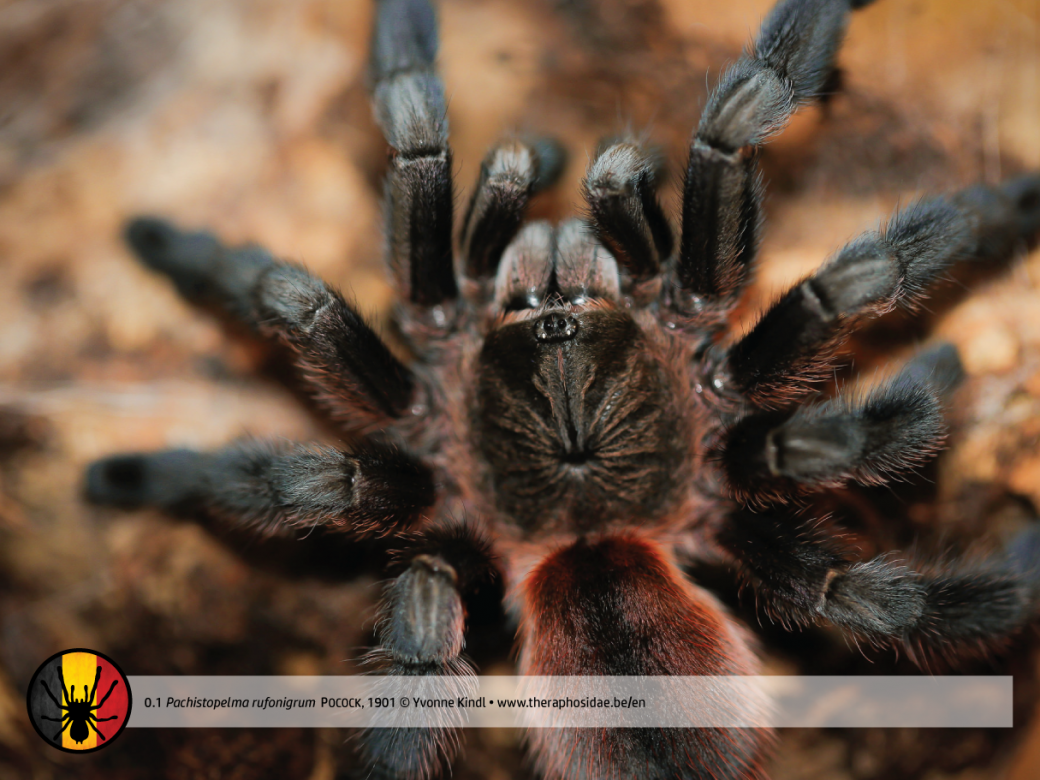 Type: Pachistopelma rufonigrum inhabits exclusively terrestrial bromeliads. You might consider this to be an arboreal lifestyle.

Span width: ≤ 12-15cm probably. As hobby stock is quite young nowadays (2017), this remains a guess. Species described in the official papers were smaller. No total span width was mentioned.

Behavior: The spider will try to flee at first. Persistent provocation can result in use of urticating setae. The spider inhabits exclusively bromeliads. However the species is mainly encountered living individually on 1 plant, in few cases 2 spiders were seen living on the same bromeliad. The spiders, however, were different of age (at least 1 immature) and no further interactions between the spiders were noticed. Pachistopelma rufonigrum is not an active hunter. She remains in the plant’s leaves for hours. When disturbed, spiders were seen diving in the phytotelma water. They stayed there for several minutes.

Sexual dimorphism: Yes. Females are heavier than males and darker colored. Immatures and mature males have type II urticating setae on the abdomen, which becomes lost in adult females. Females and immatures have a very low cephalic region.

Pachistopelma rufonigrum have been studied mostly in Estação Ecológica Serra de Itabaiana (state Sergipe). Vegetation of Estação Ecológica Serra de Itabaiana is composed of scattered shrubs, cactus, bromeliads and white sand soil. The spider was found in solely tank bromeliads of the Aechmea and Hohenbergia genus. Both types accumulate pluvial water inside their central tanks, which stands in contrast with the rather dry environment throughout the year. This thermoregulating mechanism provides a microclimate different to that of the external environment. Humidity levels are higher, while temperatures inside the plant are cooler than air-temperatures in the morning. This being said the plants are able to create a warmer environment inside the plant compared to air-temperatures outside in the evening.

* Be advised bromeliads help maintain a rather humid environment.

* Add a (preferably real) bromeliad in your set-up. If you don’t, big leaves are recommended in an arboreal set-up. Spray the leaves, if no bromeliad, on a daily basis.

* Pachistopelma rufonigrum doesn’t always inhabit the bromeliad in captivity. As the spider have been noticed burrowing, a decent amount of substrate is advised. 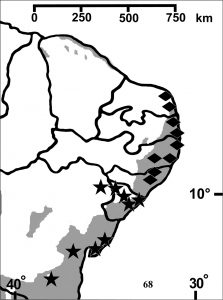 Breeding Pachistopelma rufonigrum is normally not that difficult. In contrast with other Aviculariinae, the female accepts the male’s presence for a very long time.

• 2 months after mating the female will retreat inside a burrow. Females were noticed burrowing out of sight in captivity.

• You might consider to leave the cocoon with the mother until the spiderlings come out.

• The cephalic region in females and immature species is very low compared to mature males. It is supposed the low eye tubercle and the flattened body is an evolutionary adaptation to live in tank bromeliads?

• It is supposed bromeliads serve Pachistopelma spp. by protecting them against predators and desiccation?

• The microhabitat inside bromeliads is different to hot and dry climate of the Serra de Itabaiana region?

• Spiderlings of Pachistopelma rufonigrum are remarkably big for such a small spider?

• Harvard University: Library of the Museum of Comparative Zoology.

• Notes on the first American breeding of Pachistopelma rufonigrum with an overview of the genus. Journal of the British Tarantula Society, 30(2): 15-25.