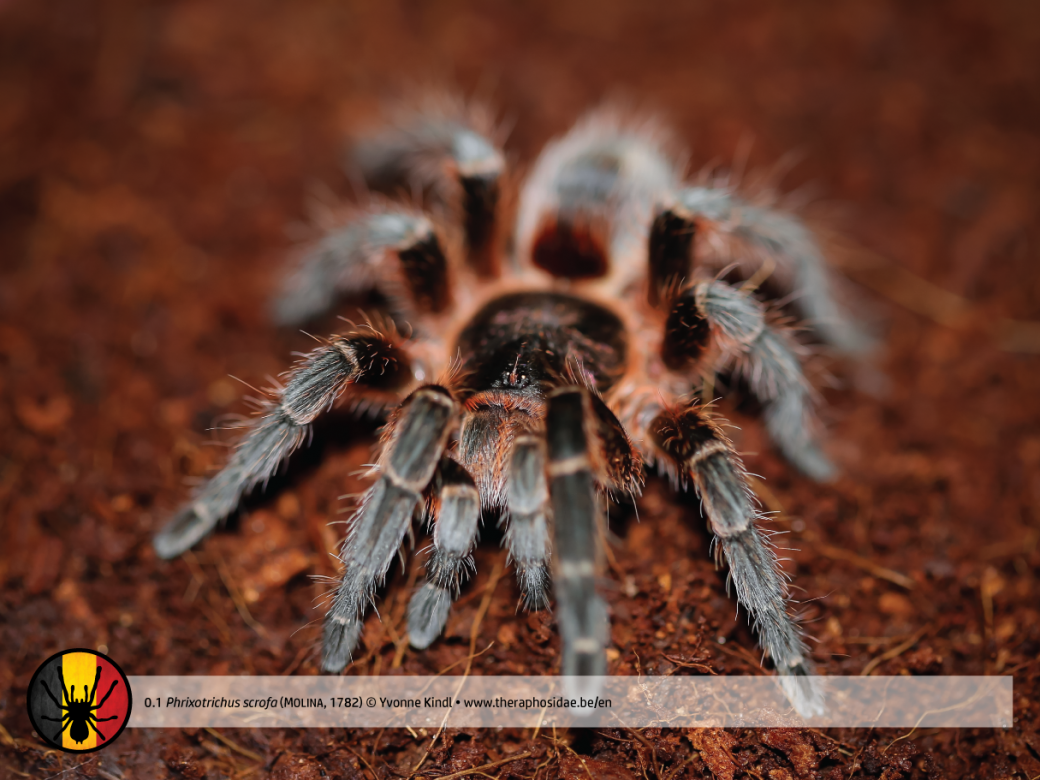 Phrixotrichus scrofa (Molina, 1782), also known as the “Chilean Copper” and the “Chilean violet”, is a neutral but beautiful Chilean semi-dwarfspecies with a rather docile temperament. She’s living across the Argentine border as well, sharing her habitat with Phrixotrichus vulpinus. Due to its rustic looks, docile temperament and easy environmental factors, Phrixotrichus scrofa is one the most perfect bird spider to start your addiction with. After “Aranea” and “Mygale” scrofa, she got categorized as part of the Phrixotrichus-genus by Simon in 1889. Later she swapped names as soon as the wind turned, being categorized as Phrixotrichus and Paraphysa (or Euathlus). Nowadays she officially belongs to the Phrixotrichus-genus, showing up more as Paraphysa scrofa since her last name change by Peters in 2000 (source).

Type: Terrestrial bird spider. In the wild they’ve been observed burrowing themselves a hole, which is rather the exception in captivity.

Life expectancy: Females can become up to 25 years old. Males are given a shorter lifetime from 4/5 years.

Behavior: Phrixotrichus scrofa is a very docile, active and visible bird spider. When given enough anchor points, they might produce a nice web as well. This, however, is rather the exception than the rule. Remarkable is that Phrixotrichus scrofa will push its cephalothorax against the surface with the abdomen pointing upwards being distrubed, different than the typical threat pose, ready to bomb a nice dose of urticating hairs towards the troublemaker. As docile as she is, you probably won’t see this happening.

Phrixotrichus scrofa lives in relatively cold and dry area. Please be informed of the fact the spider will protect itself against the weather underneath tree trunks and abandoned holes of rodents. However they’re being found underneath houses as well, they mainly live in the forest.

* Provide plenty of hiding places, varying surfaces and safe height. Phrixotrichus scrofa likes to climb once in a while.

• Avoid excessive humidity (<70%), especially when the female made a cocoon.