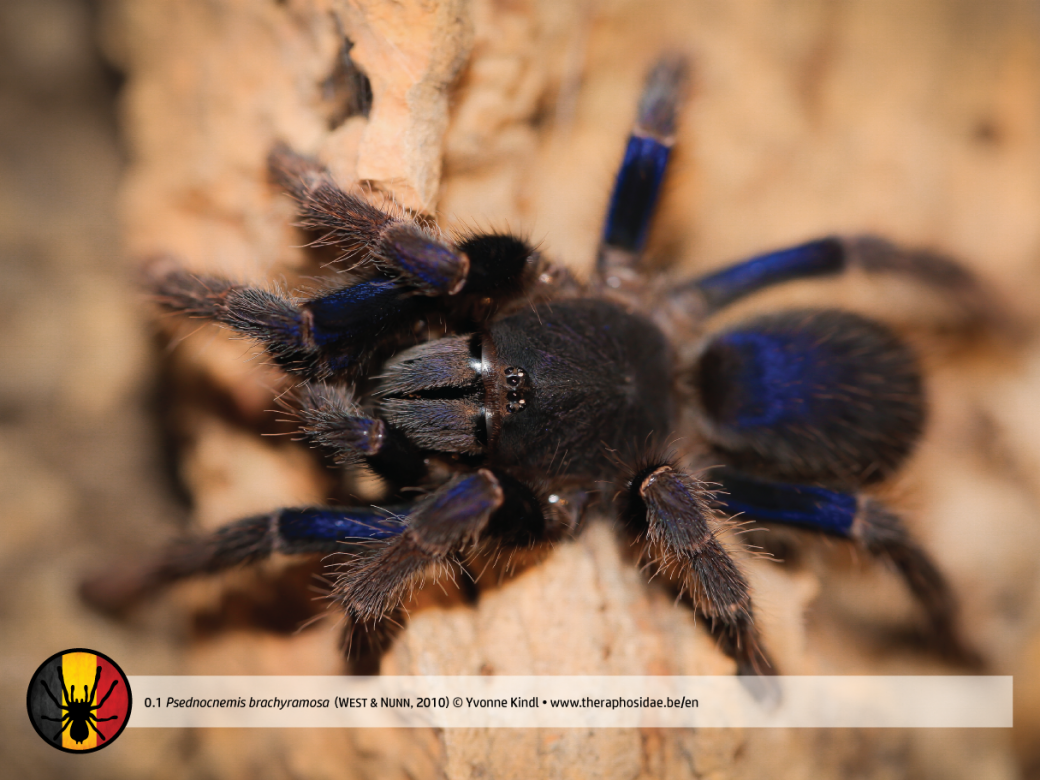 Psednocnemis brachyramosa (West & Nunn, 2010) is a very beautiful species from the montane tropical rainforest slopes in Gunung ledang, Johor, West Malaysia. The name is derived from the Greek “brachy”, which means “small”, and the feminin Latin adjective “ramosa”, which means “branching”. This last part in the name is referring to the unique spermathecal morphology. Spermathecae are uniformly sclerotized and uniquely branching. Adult females show an incredibly beautiful intense iridescent blue coloration post-molt. In earlier stages of life, the spider won’t be as colorful. The coloration of adult males is completely different and rather dull in comparison. The spider was formerly known as Coremiocnemis sp. blue. Don’t confuse the spider with the orange/brown Psednocnemis jeremyhuffi.

Behavior: The spider will burrow herself a way down. Furthermore, they’re extremely fast, which makes a good look on these rather rare. Persistent provocation can result in a bite.

* Temperatures in which we keep Psednocnemis brachyramosa are rather cool in comparison to local air temperatures.

Dry season: None. Rainfall is significant throughout the year.

Psednocnemis spp. are found in West Malaysia and Borneo, indicating the group most likely began on the Malay Peninsula, with a recent migration into Borneo. 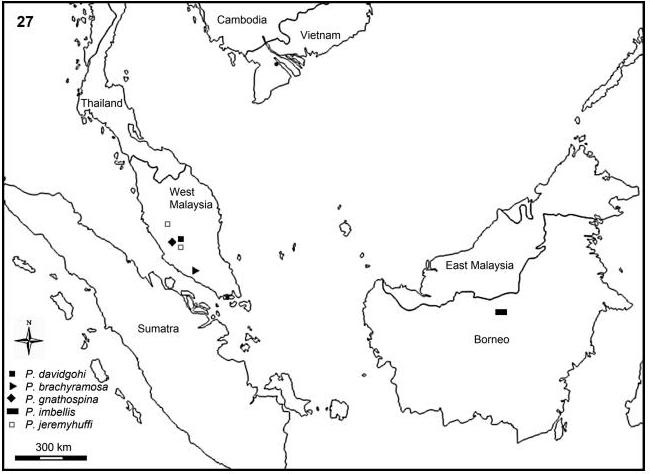 Breeding Psednocnemis brachyramosa is normally not that difficult. The females are often noticed to accept the male’s presence.

• Introduce the male by 24°C and keep it steady the whole time. Make sure you don’t exceed 24°C.

• Create “rainy season” (not “drainy”) for about 7-8 weeks directly after mating.

• Don’t do anything special to trigger the female. Keep the substrate slightly moist and temperatures around 23-24°C.

• About 5 months after mating the female will start making the cocoon. Deprive the cocoon, when desired, 6 weeks after she made it to encounter nymphs stage II. Store the nymphs at a humidity of 80-85% and a temperature of 24°C. Expect the sac to be filled with 120-200 eggs.

For an identification key of adult males (and females) in Psednocnemis I kindly advise you to read page 16 of “A new tarantula genus, Psednocnemis, from West Malaysia (Araneae: Theraphosidae) with cladistic analyses and biogeography of Selenocosmiinae Simon, 1889“, by West, Nunn and Hogg.

• Psednocnemis brachyramosa is named after her size (Greek “brachy”) and her unique spermathecal morphology (Latin “ramosa’, which is referring to branched spermathecae)?

• The intense iridescent blue is only present in adult females (post-molt)?

• Psednocnemis was based upon a distal spinal curl of terete embolus in males, presence of strong DD spiniform brush along retrolateral surfaces of coxa IV and reduction of setal counts/density of hair type 4, along proximoventral abdominal surface between pedicel and anterior book lungs?

• Psednocnemis appears to be a sister group to Selenocosmia and Coremiocnemis based upon a single synapomorphy: female spermathecae bilobed with medial and lateral lobes similar length?