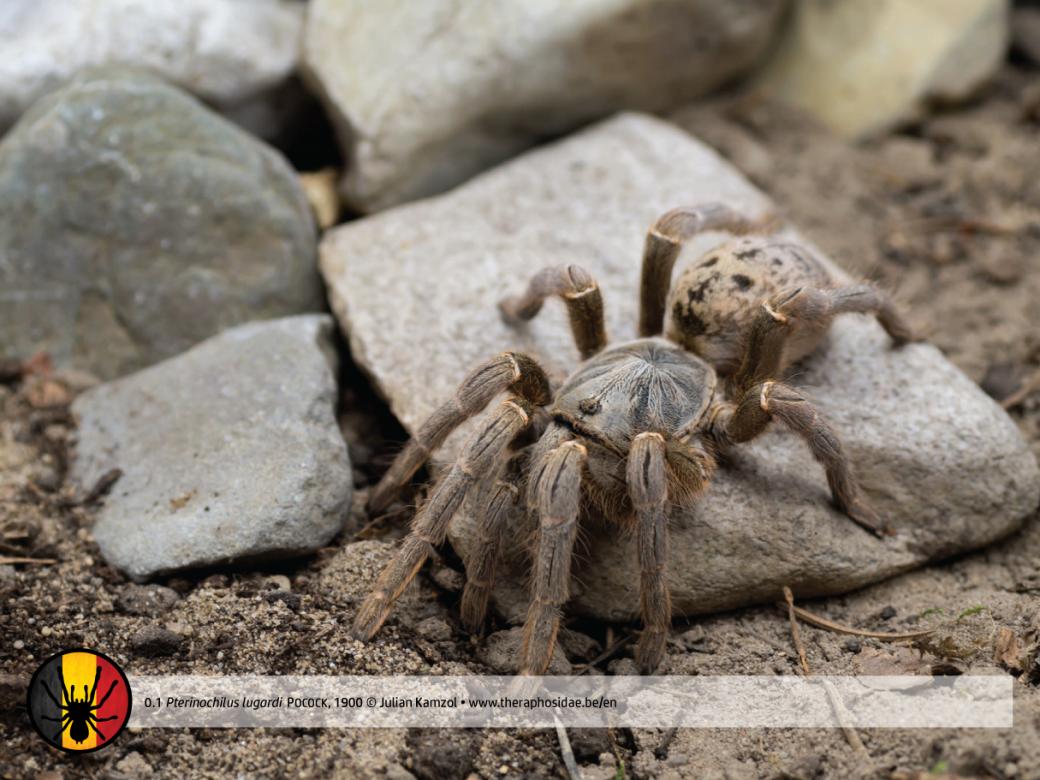 Pterinochilus lugardi Pocock, 1900, also known as “Grey starburst baboon”, “Dodoma baboon”, Fort hall baboon” or “Tanzanian blonde baboon”, is a remarkable bird spider due to its coloration and behavior from East- and South-Africa. African bird spiders are commonly given the title of baboon spider, which title theoretically only belongs to the subfamily of the Harpactirinae. Therefore Pterinochilus spp. can be considered real baboon spiders. In 1916 Mr. G. Van Dam discovered a spider in the Soutpansberg area of South Africa, which he sent to the Albani museum. John Hewitt, the arachnid taxonomist working there in that time, described the species Mr. G. Van Dam sent him as a new species and named it Idiothele pluridentatum. Remarkably the species has been seen building a trapdoor entrance (source). With the revision of the Pterinochilus– and Eucratoscelus-genus in 2002 by Gallon, Idiothele pluridentatum was found to be the same species as Pterinochilus lugardi (source). If you hear people talk about “Pterinochilus pluridentatus” or “Eucratoscelus tenuitibialis“, they are talking about Pterinochilus lugardi. The spider is fast and probably equipped with strong venom, but famous to be “more docile” and “less defensive” than Pterinochilus murinus. Therefore Pterinochilus lugardi is the perfect choice to start with tarantulas from the Old World.

Behavior: The spider will try to flee at first. Persistent provocation can result in a threat-pose and a bite. Nevertheless she’s often being considered to be “less defensive” than Pterinochilus murinus. Pterinochilus lugardi is a burrowing species, often visible at night. Remarkably she’s the only species from the genus making a trapdoor entrance.

In the South temperatures can be rather cool, around 18°C, with a warm season between 26-28°C. In the Zambezi-valley however, temperatures often reach up to 32-35°C. Please be informed of the fact the spider will protect itself against the weather underneath tree trunks, rocks, human structures and abandoned holes of rodents, hiding underneath a beautiful trapdoor. Temperatures in their burrows differ from environmental temperatures. Don’t overheat the terrarium. Prolonged droughts can take place for heavy rainfall.

* Keep the substrate rather dry. A humid environment can have disastrous consequences for Pterinochilus lugardi.

However Pterinochilus lugardi is known to be rather defensive towards any disturbance nearby, they surprisingly accept the presence of a partner for a short period of time nearby. Seperate male and female after mating, giving it antoher try a few days later. Different to most theraphosids the Harpactirinae cocoon is not spherical and mobile but fixed (source).

• Pterinochilus lugardi sometimes creates a second cocoon 8-12 weeks after the first one. The amount of fertilized eggs will probably be less than the first cocoon.

• Pterinochilus lugardi is the perfect choice to get to start with Old World Tarantulas?