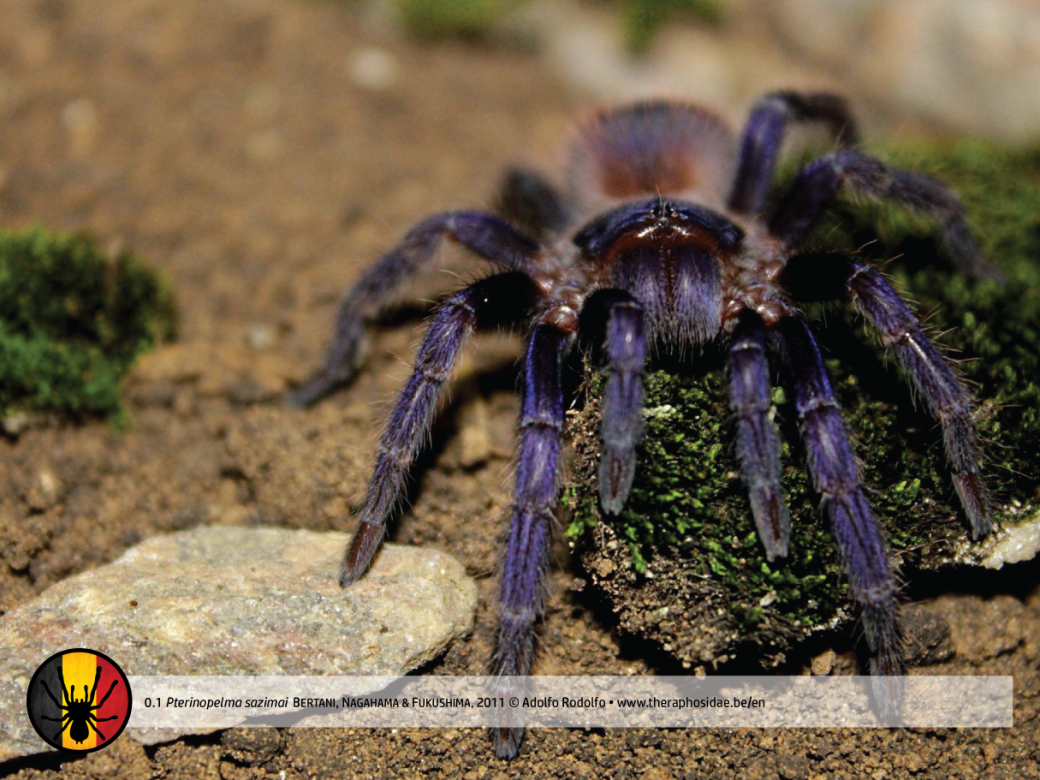 Pterinopelma sazimai Bertani, Nagahama, Fukushima, 2011, also knwon as “Brazilian blue tarantula” or “Iridescent blue tarantuala”, is a wonderful bird spider due to its coloration and behavior from Brazil. She’s named after dr. Ivan Sazima, the Brazilian zoologist who was first to discover the species in 1971 and investigate the species for 10 years with Sylvia Lucas in the institute of Butantan. When the tarantula died molting, she hasn’t been described yet. In 2011 the 3 investigators completed the work of dr. Ivan Sazima (link). Pterinopelma is a monophyletic genus sister to the clade Lasiodora (Vitalius and Nhandu), meaning they probably have the same ancestors (source). As first Brazilian species Pterinopelma sazimai was added in the top 10 of the IISE in 2012, on their quest to inspire, encourage and enable the advancement of taxonomy and exploration of earth’s species. The bird spider is a true showpiece in the hobby, smuggled plenty of times to America and Europe. This in combination with a shrinking habitat, makes that the spider is locally endangered. In order to save the species, please don’t buy wild caught Pterinopelma sazimai, but get them from successful breeders.

Behavior: Pterinopelma sazimai will try to flee at first. Persistant provocation will result in use of urticating setae. They’re known to combine the characteristics of terrestrial-, burrowing- and to a lesser extent arboreal bird spiders.

The 3 researchers were only able to rediscover the species after 5 years of intensive work, due to the fact the area she lives in is very harsh. All species were found on high altitude with poor vegetation and extreme weather conditions (10-35°C), experiencing periods of extreme precipitation and drought. Please be informed of the fact the spider will protect itself against extreme weather conditions creating a thick web underneath and above tree trunks, rocks, branches and leaves. No extreme is optimal for the spider. Do not overheat the terrarium.

* Pterinopelma sazimai is often found between rocks. Make sure rocks in your terrarium can’t collapse from the moment she starts making her burrow.

* The spider is often offered too little substrate. 1x span width is recommended.

* The spider lives in wet area, often so wet she has to protect her burrow not to flood. Note that cages with high humidity levels are very sensitive for mites and other parasites. Please take your precautions.

Warmest months: From october until may. Temperatures often reach 35°C.

Mating Pterinopelma sazimai normally runs smoothly, when given a winter.

• Drop temperatures to 18-22°C for 2 months before pairing. Introduce the male from the moment temperatures, humidity and food supply systematically rise.

• Pterinopelma sazimai was in the top 10 of the IISE in 2012 as first Brazilian species?