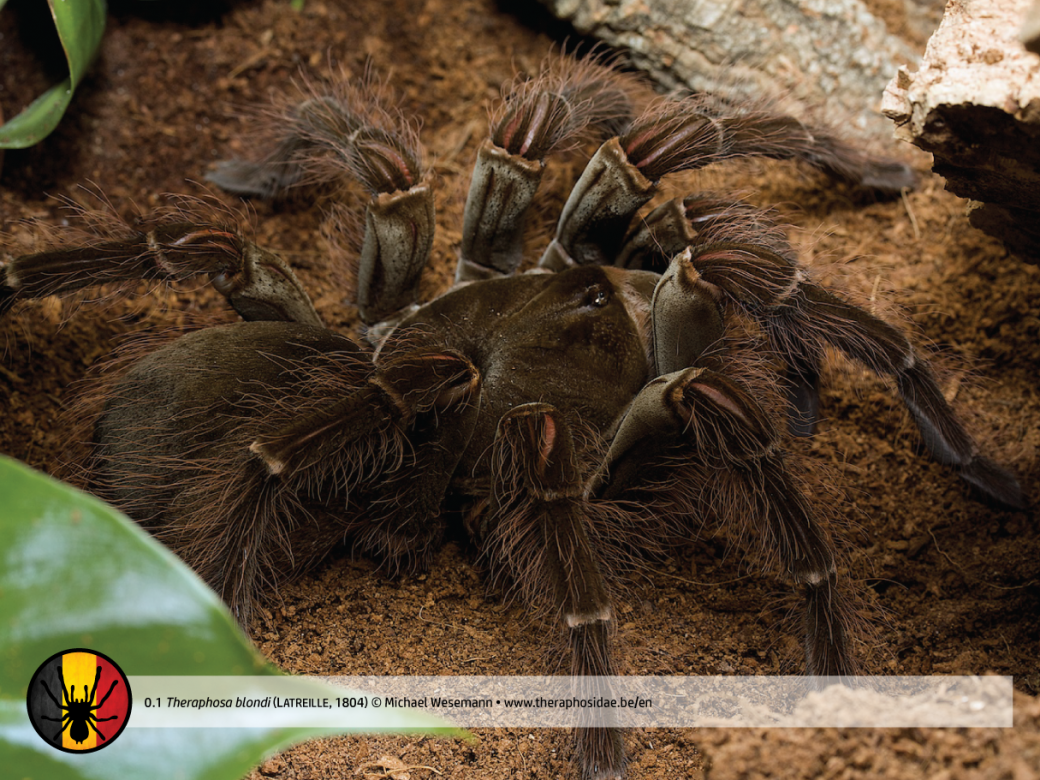 Theraphosa blondi (Latreille, 1804), also known as the “Goliath birdeater”, is a very stunning and remarkable bird spider due to its size from Brazil, French Guiana, Suriname and Venezuela. In 1804 the spider became “Mygale blondii“, being categorized as part of the Theraphosa-genus by Thorell in 1870. 33 years later, in 1903, “blondii” suddenly changed in “leblondi”, what is still incorrectly being used occasionally. Theraphosa blondi is well known to be the largest spider in the world, but with Heteropoda maxima (not a bird spider) and the Bolivian Pamphobeteus antinous in mind that’s not entirely true. She’s wanted by every hobbyist, as they’re a rare (and expensive) showpiece in every collection, but pay attention… Theraphosa stirmi is a look-alike from the same region as Theraphosa blondi. Differences are hard to spot for the unexperienced eye. Breedings are more successful and therefore Theraphosa stirmi is much cheaper than Theraphosa blondi. Inform yourself about the differences (below) and buy your Theraphosa blondi by a confidential source.

Growth rate: Relatively fast. Spiderlings do have a remarkable size of up to 1,5cm body length.

Life expectancy: Females can become up to 25 years old. Males are given a shorter lifetime from 3-6 years.

Behavior: Nervous. The spider will not hesitate to shed its urticating setae or start stridulating in an impressive threat pose. Urticating setae of Theraphosa blondi are remarkably effective against mammals, especially in the eyes and/or inhalation. As the spider gets older, she’ll become calmer. During the day they’ll stay in their burrow. At night they’ll be visible at the entrance of their burrow.

Theraphosa blondi lives in tropical humid and warm area, in the primary tropical rainforests of South-America. Temperatures almost daily reach levels up to 30°C with very high humidity, but… Because of the fact the area she lives in is very dense, with high trees and lots of vegetation, light and warmth is not passing through properly. Therefore environmental temperatures are a few degrees lower than above the trees. Burrows, with depths up to 1,5m, are often being built on slopes in montaneous area, trying to create a rather cool and humid environment. Please do not make the common mistake, providing wet substrate in an overheated terrarium.

* When kept too dry, Theraphosa stirmi might experience (fatal) problems during molt. Perfect environmental factors are crucial for survival.

* When kept too wet with poor ventilation, fatal fungus might start to grow on the spider. Spray the tank once (sometimes twice) a day.

Please read carefully the introduction underneath “Information for keepers”.

Differences in the Theraphosa-genus (Anatomy)

• Setae on the patella and below.

• Setae on the bottom side of the femura.

• Chelicerae and fangs are relatively “short”. As a result the carapace is flatter.

• Spiderlings and juveniles have brown tarsi.

• No setae on the patella.

• No setae on the bottom side of the femura.

• Chelicerae and fangs are relatively “big”. As a result the carapace is less “flat” than the Theraphosa blondi.

• Spiderlings and juveniles have 4 blonde/pink tarsi.

• Much more setae, especially on the bottom side of the legs.

• In general a pink-/reddish hue.

• Spiderlings and juveniles have 8 blonde/pink tarsi. 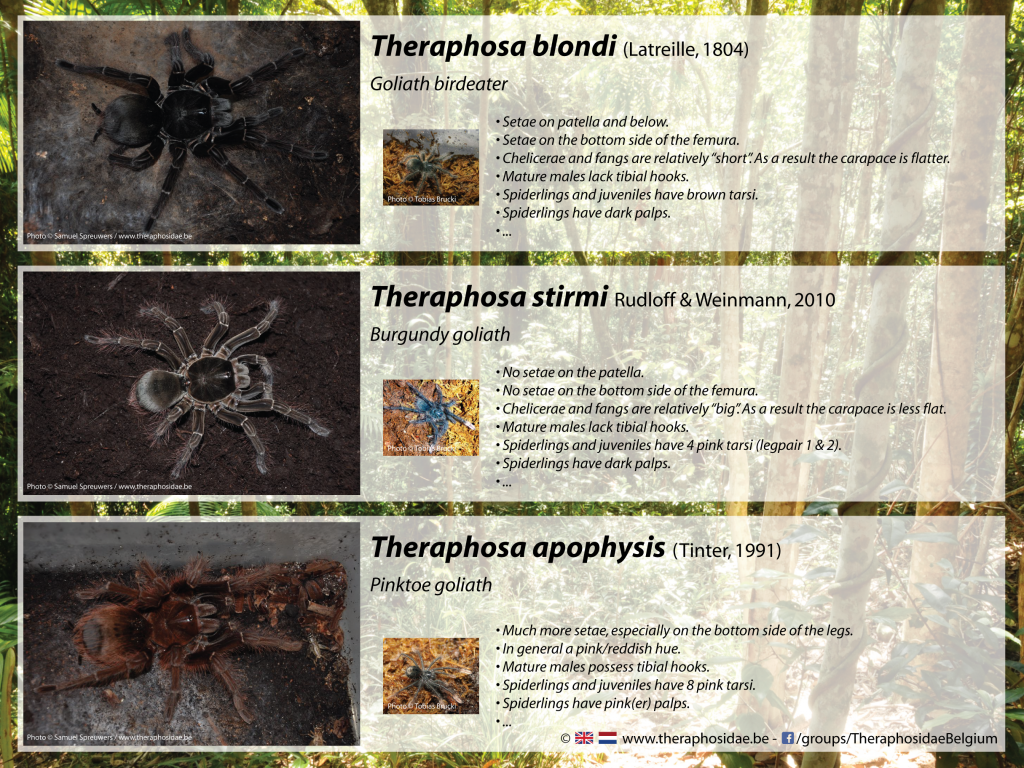 Pairing a Theraphosa blondi does not always run smoothly, even though the man serving as diner for the female is rather the exception. Nevertheless the female can react very defensive towards the male’s presence. Don’t put them together without staying close. Most things go wrong because of too high temperatures. The spider will eat the eggsac or the eggsac starts rotting. High humidity, however, very good ventilation and deep substrate (for a large burrow) is crucial for success.

• Make sure the female is well-fed (not obese) before you introduce the male. The exception makes the rule, but… Fatter females produce smaller posterity.

• Keep temperatures between 16-18°C for 4-5 weeks after mating. Let the cage semi-dry out (but keep spraying once a day, as low humidity is not healthy for Theraphosa blondi).

• Trigger the lady 4-5 weeks after mating by moistening the substrate, raising up humidity (by spraying, 85%+) and temperature (18-22°C).

• 6-7 weeks after the cocoon was made, 50 spiderlings might show up. Don’t deprive the cocoon, unless necessary.

• Make sure you leave the female in perfect conditions undisturbed after a successful mating.

• Theraphosa blondi is being named after the copperplate of Maria Sibylla Merian from 1705?

• Mama Theraphosa blondi is taking care of her posterity for quiet a long time?

• The diet of a Theraphosa blondi can differ from other bird spiders due to her size? In their natural habitat it’s not uncommon they eat a frog, lizard, bat, rat… Hobbyists sometimes feed them small rodents, such as mices. Don’t exaggerate this, because an unbalanced diet will make your spider obese and unhealthy.