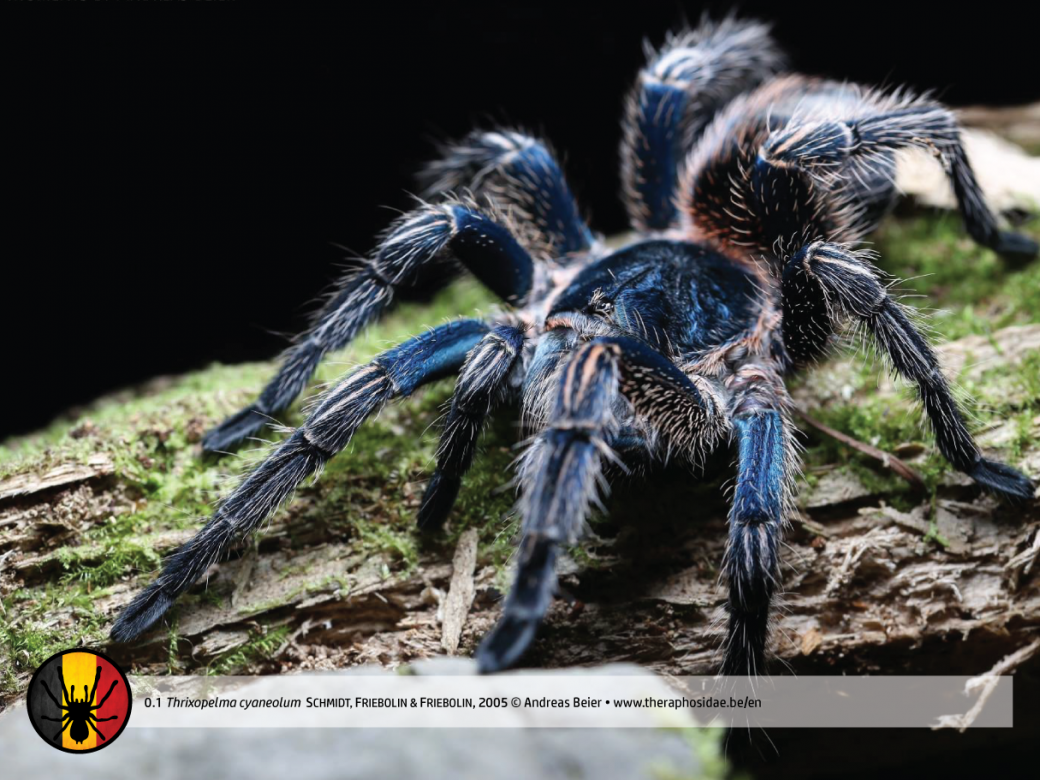 Thrixopelma cyaneolum Schmidt, Friebolin & Friebolin, 2005, also known as “Cobalt red rump”, is a stunning medium-sized bird spider due to its coloration from Peru. Because some German taxonomists are of the opinion that the name Thrixopelma cyaneum initially used is not available, it is later in 2005 being replaced by the new name Thrixopelma cyaneolum sp.n. The rather dull colors at early age become more vibrant while growing up, showing an overall marineblue shiney coloration with deep red abdominal setae. Sad but true those colors fade away as time passes since the last molt. With the exception of the bright blue femura, other leg segments do show some beautiful lining, similar to the far more famous Aphonopelma seemanni. Beginning hobbyists often confuse those 2 spiders, but there is a little trick. Thrixopelma cyaneolum shows a reflective patch of urticating setae on the abdomen, which is different to the neutral abdomen of Aphonopelma seemanni.

ATTENTION: This caresheet is very different to almost every other caresheet on the web. In our opinion, Thrixopelma cyaneolum is kept far too hot and humid.

Origin: Central-West Peru (from Huancavelica until Huancayo and Huánuco).

Life expectancy: Due to the fact the spider is a very slow growing species (and the female becomes adult at an age of 6 or older) it is being assumed females can bewome up to 20 years old. This, however, is not being confirmed yet. Males are given a shorter lifetime, becoming adult at 3-4 years.

Thrixopelma cyaneolum lives a few tens of kilometers inland from the Peruvian West coast (source). Remarkably, the locations as given in the paper exhibits very different climate, being overall rather cold and dry for the avarage bird spider. Local temperatures fluctuate between “rather cold” and “cold”, making Thrixopelma cyaneolum a very hardened species. Please do not provide extremes in captivity, as it is not ideal for the spider.

Rather dry from april until november. Avarage temperatures around 9°C. Never below freezing point.

Rather dry from april until november. Avarage temperatures around 12°C. Never below freezing point.

Rather dry from april until october. Avarage temperatures around 20-22°C. Never below freezing point.

• Scopula of metatarsus III extends over 1/3 of the segment.

• Scopula of metatarsus III extends over 1/2 of the segment.

• The female will start making the cocoon 3 months after mating. Gestations sometimes takes 1 year. Deprive the cocoon, when desired, 4 weeks later. Store the eggs at a humidity of 70% and a temperature of 24-26°C. Numbers may vary from 100-200 spiderlings.