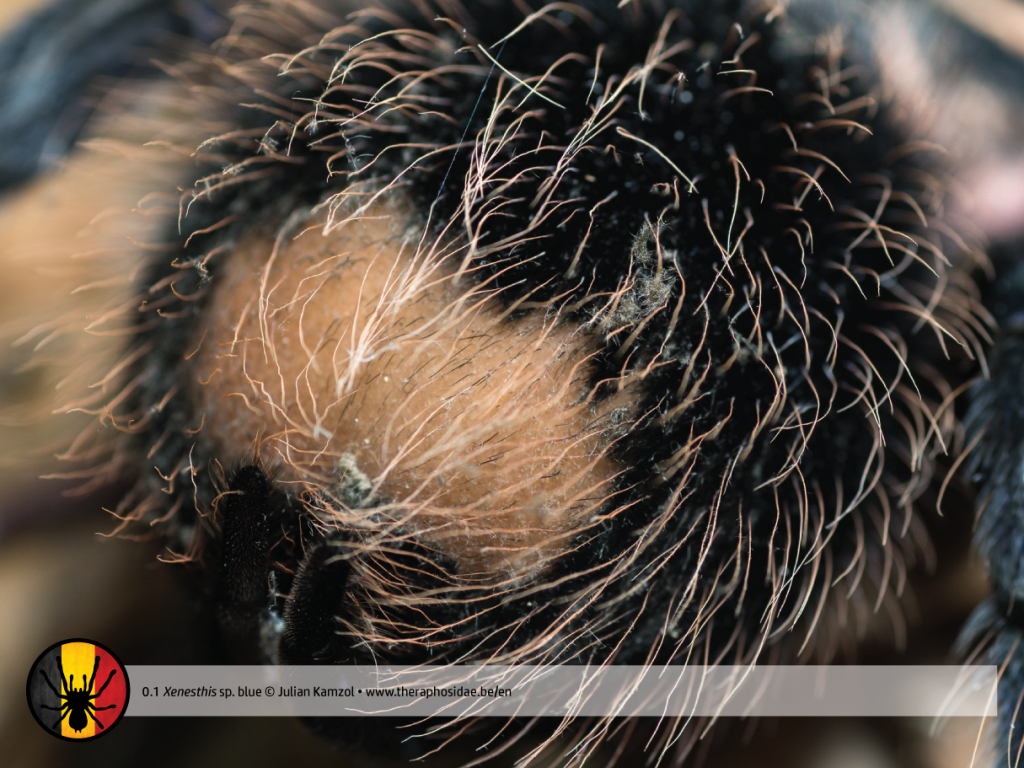 Bird spiders are divided in 2 large groups, depending on their location. It is more likely spiders from the “New world” (America) will possess urticating setae and a weaker venom than spiders from the “Old world” (elsewhere than America), from which a bite can be very painful and result in hospitalisation. Old world tarantulas are not armed with urticating setae, which explains why it is generalized they possess “stronger” venom than new world tarantulas. With only a threat pose and a bite as defensive option, the bite better be good! (Note: Except for Poecilotheria spp. there is no scientific evidence proving this generalization is completely correct. Read more and correct information about venom on our anatomy page.) Be aware of the fact you’re dealing with living animals, whether it’s a bird spider from the old or the new world, built to survive in a harsh world. They live by instinct, prefering to flee, but attacking without a doubt. However you see plenty of people handling their eight-legged pets, we don’t recommend it unless it’s necessary.

• Living in the “Old world”, elsewhere than North-, Central- or South-America.

• Most people generalize they possess stronger venom. Except for Poecilotheria spp. there is no scientific evidence yet.

• Living in the “New world”, being North-, Central- or South-America.

• More docile, but can react very defensive with their urticating setae. Ongoing provocation can end up in a bite.

• Some can be handled, but it’s not recommended.

• Most people generalize they possess weaker venom. There is, however, no scientific evidence to support this yet.

Although “urticating setae” is a widly spread and generalised phenomenon, they do exist in a variety of shapes and sizes. Aimed or located with precision, they’re being used to irritate the prey or troublemaker. 90% of the bird spiders from the new world are armed with urticating setae. Only Tapinauchenius and Psalmopoeus, as well as the subfamily of the Ischnocolinae, do not possess urticating setae. Examples of urticating setae on the subfamily of the Ischnocolinae, as reported by Schmidt in 2003, were in fact nothing more than setae protecting the own skin. However research on urticating setae has been increased the last decennia, lots of questions do remain unanswered. What can be said, is the fact that they are subdivided in 6 types (as you can see on the picture), provided with barbs and used in different ways. A bird spider can carry 2 different types, on the abdomen or on the femura of the pedipalps (bv. Ephebopus).

Although little was known in 1972, Cooke et al. described 4 morphological setae and numbered them, from I to IV. They found that type II was exclusive for Avicularia spp., Pachistopelma spp. and Iridopelma spp., all part of the subfamily of the Aviculariinae. Types I, III and IV were being found on more subfamilies of the new world. Later, in 1990, Marshall & Uetz were able to describe a new type, type V, found on the pedipalps of Ephebopus. Type VI was introduced by Pérez-Miles in 1998, after finding it on the abdomen of Hemirrhagus cervinus (Simon/1891). Types I, II, III and IV are embedded by a penetrating tip, in contrast to type V and VI which are embedded in hair follicles. Type VII was introduced by Perafán, Galvis & Pérez-Miles in 2016 together with the description of a new genus from Colombia, Kankuamo.

Urticating setae are very effective against vertebrates and invertebrates, but appropriately used as well against potential attackers. Webs on which the spider molts and cocoons with fertilized eggs will be provided with a necessary dose. Therefore it’s recommended to use some kind of gloves when you’re working inside the cage of a new world tarantula. Make no mistake, there is nothing like a resistance factor. The effect of the hairs on your body will get worse, year by year.

• Urticating setae are being used both actively and passively as a defensive mechanism.

• Vellard (1936) and Buecherl (1951) claimed that Lasiodora spp., Grammostola spp. and Acanthoscurria spp. do possess the most urticating setae on their bodies.

• Urticating setae of Grammostola spp. are relatively harmless to humans, while those of Acanthoscurria spp. are moderately irritating where those of Theraphosa spp. can have serious consequences, such as severe rash, itching, breathing problems… Some people may encounter an allergic reaction. Ensure you don’t inhale any of the hairs and protect your eyes. In case you’re experiencing serious problems, visit a doctor or ophthalmologist.

• Belongs to the subfamilies of the Aviculariinae and Theraphosinae, with exception of Grammostola spp.

• Very effective against invertebrates, both actively and passively in webs and cocoons. Some larva are being perforated and killed by setae type I (example).

• This type is not being bombarded. In order to make use of them, direct contact is necessary.

• Most efficiënt type against vertebrates and invertebrates.

• Belongs to the subfamilies of the Aviculariinae and Theraphosinae, more specific Grammostola spp.

• Very short and light compared to other types of urticating setae.

• Differs from others by having a small distal oval patch of lanceolate reversed barbs near the penetrating tip and small main barbs that extend along the whole setae from the apex.