Without any foreknowledge the lifecycle of a bird spider seems pretty surreal, almost extraterrestrial. Meet larvae, nymphs and spiderlings. Let’s behold the beauty and the cruelty of Mother Nature.

When are bird spiders adult?

Bird spiders can be considered adults from the moment they are ready to mate. Mature males are easily distinguished from sub-adults, due to the bulbusses on the pedipalps, sometimes armed with tibial hooks on the tibia of the first leg pair. Stop looking for tibial hooks if you can’t find them on a mature male. They don’t always own them, as it is sometimes used to distinguish 1 spider from an other (example). Much more difficult is it to recognize a “mature” female. Anatomically a female is “mature” from the moment the spermathecae are hardened, showing signs of sclerotization. Speaking of a coloration with black, brown and red, it remains a task for the scientist and the experienced hobbyists. Exceptions do not possess spermathecae (example). Therefore I’d rather think a female is ready to mate when she’s at least 80% of her maximal size, with a carapace as big as the one of the male, welcoming the male in some way when introduced.

How do bird spiders mate?

Preparing themselves adult males will make a spermweb on which they attach a drop of semen, followed by actively loading their bulbusses with it. Ready to mate adult males can be highly active, even by day, searching for a woman of the same species. When she’s being found by senses of touch and/or smelling traces strategically left by the female, men introduce themselves by drumming on the females web or nearby with their pedipalps and frontlegs. The way the female responds gives him information whether or not she might be ready to mate. Trying to lure the female out of her web, using his whole body, he might encounter an ignorant or very defensive female. If not amused by his presence, she might attack him trying to put him on her menu. When the female responds acceptable, he still needs to be on guard. Both male and female will be drumming, sometimes for hours, while he tries to make bodycontact with his (probably longer) front legs between her front legs and chelicerae. Most male species, but not all of them, possess tibial hooks on the tibiae of the front legs to neutralize her chelicerae. With the female dominated, he’ll fill her spermathecae with his semen. Bird spiders without spermathecae will save extracted semen in oviducts and uterus externus. Normally it’s the female deciding she’s ready to mate, using specific drumsounds, but when the man decides to go for it, in some cases it might look like a violent rape, resulting in a very agressive respons of the female whether or not the copulation was successful. Story goes the female will often try to kill her male after mating, but that’s not true. They might show they’ve had enough of him, but the chances he might end up as a meal depends on the species. The Avicularia-genus is known to be a very docile species towards their men, such as (surprisingly) the female Pterinochilus murinus who might welcome her man a few days in her burrow, mating more than once. Males of Chromatopelma cyaneopubescens however need to be very cautious as their females are notorious to attack and eat the studs.

Mating was a success. What happens now?

In nature ways of both male and female will seperate forever. Sad but true the male will never see his posterity and probably die soon. In some cases they’re able to mate more than once. After a period of carrying the eggs inside her womb the female will most likely disappear inside her burrow, preparing herself to create life. We’re at the beginning of one of natures wonders, seperated in different stages.

Once the female decides the time is right, she will start webbing a thick and strong web, attached where possible to release the unfertilized eggs out of her womb. Before doing this she will have carried the eggs up to 8 months, depending species and different conditions like temperature, humidity, food availability… Once the eggs were dropped, the female will release the semen she carried all along in her Receptaculum Seminis to fertilize the eggs. On top she’ll create another thick layer of web, using pedipalps and chelicerae to make a ball-shaped cocoon afterwards, sometimes camouflaged with whatever they find nearby. Some new world tarantulas, like the Avicularia– and Theraphosa-genera, will fortify the cocoon using urticating setae. Expecting lots of new life, the mother defends the cocoon, her crown jewel, with her life. Prey won’t be accepted plenty of times and with chelicerae and pedipalps protecting the cocoon she’ll be able to flee and hide deep into her burrow (example). Other female bird spiders will take position in between the cocoon and the entrance of her burrow, reacting more threatening and defensive towards any disturbance. Some arboreal species, such as the Heteroscodra-genus, will attach their cocoon against a strong wall of their burrow. Interesting as well is the fact that some species, such as Neoholothele spp, Hysterocrates spp, Metriopelma spp, Pterinochilus spp, Psalmopoeus spp, Tapinauchenius spp (Rick West, 2002), Ephebopus spp (Hooijer, 2002), Poecilotheria regalis (Evenow, 2002) and, is being said, Haplopelma lividum, have been seen making a second cocoon short time after the first one.

Meanwhile the embryos in the cocoon become larvae. It’s a beautiful phenomenon, knowing that from the fertilized eggs 8 legs, 2 pedipalps and a carapace emerge, with eyes as black dots and the egg as abdomen. The larvae are tiny, uniform translucent and bald. They live on what’s in the yolk, unfertilized eggs and/or other larvae. It’s a harsh world. Only the strong survive. 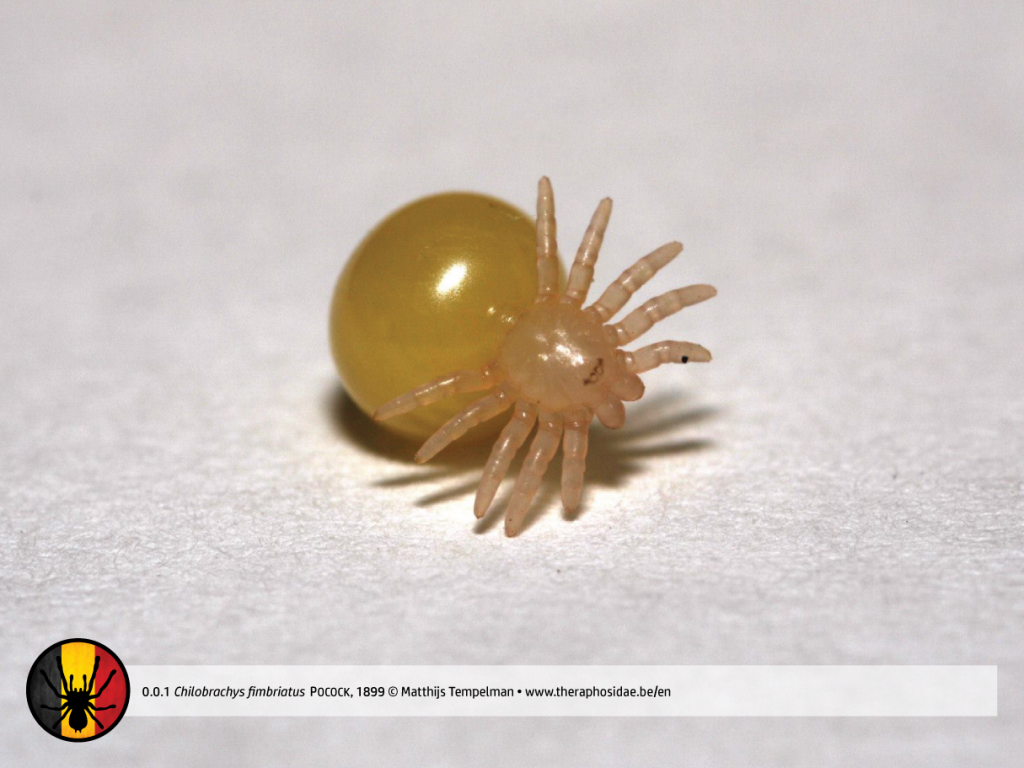 The bird spider leaves the larval stage behind from the moment they start to molt for the first time. Nymphs are easily distinguished from larvae, due to the fact they have tiny hairs on their bodies. Just a few weeks more and they are ready to leave the cocoon.

When will spiderlings leave mother’s web?

Few weeks until 3 months after nymphal stage, bird spiders will molt a second time. This time they will become spiderlings. From now on we can see beautiful little spiders, whether or not with a variety of colors and/or chevron patterns, which will disappear, change or become more striking when time passes. From the moment the mother opens the cocoon with her fangs, nymphs and spiderlings mostly rely their own instinctive capacities. Being exposed to the dangers of the outside world, they will need a good hiding place and food in order to survive. At first the spiderlings will wait at the burrow’s entrance before leaving, forever. It is beautiful to see how up to 100 spiderlings of some species, such as Brachypelma vagans, leave their holes at nightfall in a “train”. In some cases the mother will take pity on the welfare of her little ones for a while, such as Monocentropus balfouri, Theraphosa blondi and some African bird spiders, ensuring they’re strong enough before they leave “hotel mama” forever. However, this is rather the exception than the rule.

How many spiderlings will become adults?

Besides all enemies the bird spider has to deal with, the amount of casualties during the early stages is significant. It is, however, very difficult to answer this question with a standard, due to the fact cocoons are different in sizes and fertilized eggs. You might not have expected it, but the environment is a very influential factor. Bird spiders living in a stable environment often produce fewer offspring, as temperature, humidity and food supply throughout the year are fairly constant. In contrast we have bird spiders living in unstable environment. As food supply, temperature and humidity are often tested to their limits, so is survival. Cocoons contain more eggs, fighting the extremes with numbers, expecting a happy few to become adults.

• The juvenile-, sub-adult and adult stage

As the spiderlings grow up, chances of survival increase, unless they have to deal with parasites, molds, spider wasps or sudden extreme environmental conditions (such as flash floods). The spider gets stronger and more prey can be found. Remarkably tarantulas don’t only often change color getting older, but their behaviour can change as well. Spiderlings of Caribena versicolor, for example, will settle lower than their older brothers and sisters, while Chilobrachys fimbriatus gets more comfortable leaving her burrow when she gets older. This behaviour is crucial for survival.

Once 2 adults cross their paths, everything starts all over again. Good luck, gentlemen!

How can I prepare my bird spiders to mate?

Please take a look at the bird spiders you’re looking for on this website. You’ll find more information about the breeding process and your possible role in it on the page below. However, make sure your male is fully loaded after making a sperm web, the female ate well before you introduce the male, the spiders (especially the female) experienced seasons if necessary and the environmental factors are perfect. Sometimes you’ll need to make both male and female get used to each other by placing both terraria a few days close.

How do I care for the eggs?

The cocoon provides a protective and sterile environment in which the eggs develop into larvae and nymphs. Only once the mother opens the cocoon, the little ones can go around freely. It rarely happens that the mother opens the cocoon before nymphal stage. When done, the consequences for the eggs can be disastrous. Therefore successful breeders exceptionally take the cocoon from the mother before nymphal stage. When done, it’s the breeders responsibility to turn the eggs a few times each days. Otherwise weight will be pushing at one side of the eggs, maybe killing the spider. In perfect circumstances it is recommended to leave the cocoon as long as possible with the mother. After all, mothers generally know what’s best for their children. Put the eggs in the incubator creating an environment as close to the spiders natural environment as possible. In general temperatures should be between 25-28°C, with humidity close to 70%. Please follow the steps as shown in the picture below to make a very effective incubator (or watch the video of tarantulaguy1976). Know however some breeders are convinced it’s better to let the mother open her cocoon. The odds of survival decrease individually, but this phase would strengthen the spiders. As they’re depending food to survive, please give your spiderlings a personal little cage in order to prevent cannibalism. 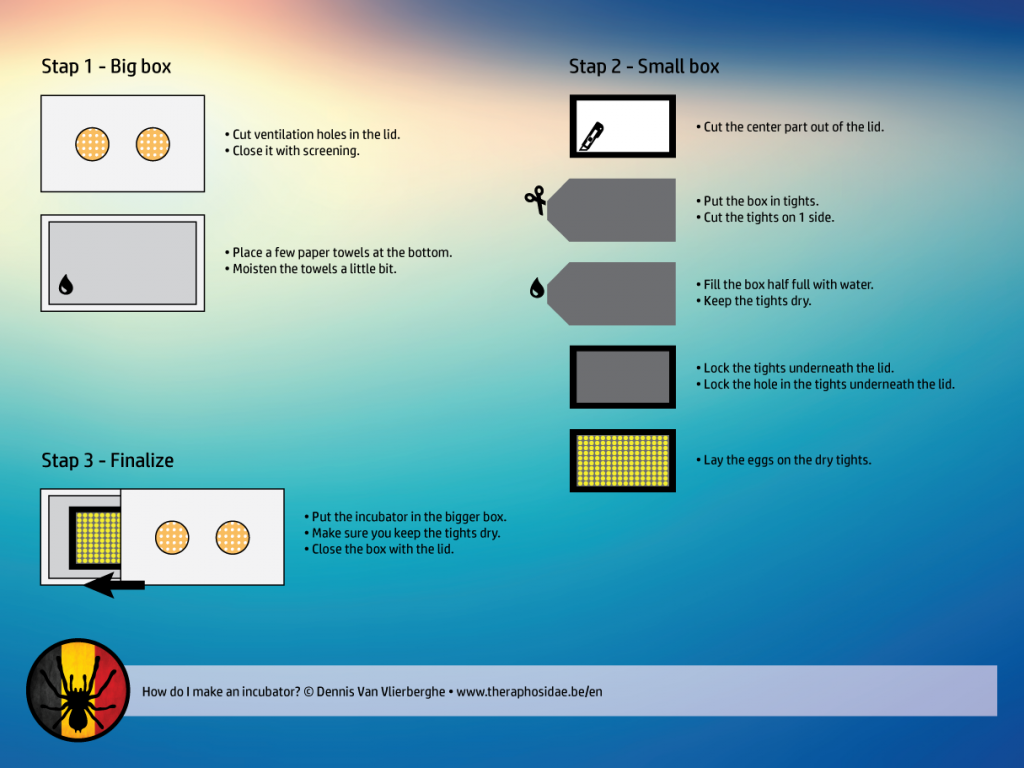