Armed with teeth and driven by hunger there are always carnivores ready to kill, leaving prey no option but staying on guard. In order to survive prey developed plenty of anti-predator mechanisms, such as camouflage and chemical warfare, but still they’re often forced to bow their heads. Spiders rely on their primitive skills, trying to catch their next meal and to avoid becoming one. A smart interaction between sensory hairs on the body and an intelligent websystem (with different structures and layers of silk), should inform the spider whether an approaching animal is a threat or a possible next meal. Aiming for the kill, bird spiders often attack as fast as lightning, pushing their fangs inside the victims body to release venom and digestive enzymes in order to suck the prey completely dry. Harder bodyparts, such as skin and armor, remain uneaten and are left somewhere else than in the burrow. Immediately throw those leftovers away, as they are wanted by parasites. 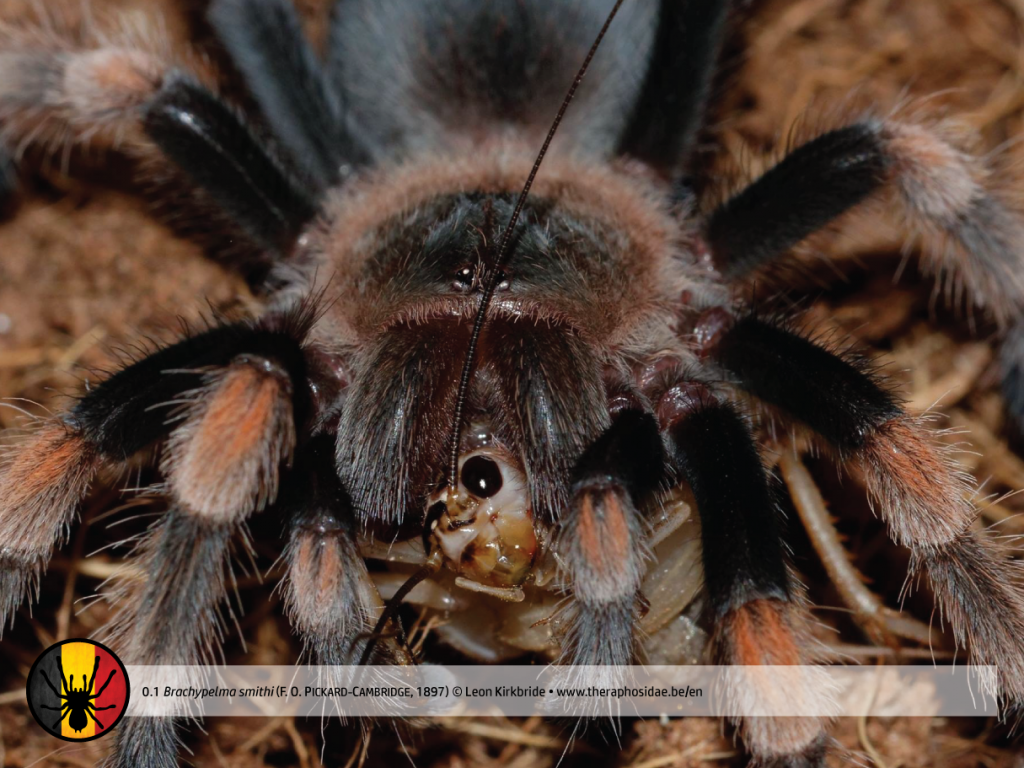 What do bird spiders eat?

The diet of a bird spider mostly contains insects, invertebrates and a limited amount of small vertebrates. Crickets, grasshoppers and cockroaches in all shapes and colors, as well as mealworms, fruit flies and moths often cross a tarantula only once in their lifetime. Other spiders, small rodents, frogs, lizards and snakes sometimes complete the menu, depending the spiders size, location and lifestyle. It goes without saying that arboreal bird spiders eat more flying prey than their terrestrial brothers and sisters, probably enjoying a cricket more often. Nevertheless, not every possible prey passing by is being seen as prey, as it depends the spiders size. Rule of thumb is that every prey you offer is smaller than the tarantula’s body length itself, about the length of the spider’s abdomen (or close to body length). When you’re offering smaller sized prey, please offer a few. When the prey is remarkably bigger, please put her on a strict diet for a few weeks. Mices, for example, are given to the larger species, such as Theraphosa spp. and Acanthoscurria spp. once in a while. Rumour is spread that the calcium in bodies of vertebrates is not good for spiders, but there’s absolutely no scientific research confirming this (yet). We’ve discussed about the topic in our facebookgroup, and this was the result. Don’t overfeed your tarantulas, because it’s unhealthy and will probably shorten their lifes.

Can a bird spider eat too much?

It is and will remain the neverending discussion whether or not a bird spider can eat too much. Many are convinced of the fact the spider will reject food when full. Until then, feeding should be recommended. I truely don’t share this opinion. Some bird spiders are known to attack and eat almost every prey that passes. Plenty of times those are bird spiders that live in a harsh environment where food supply is uncertain. In order to survive they’re driven by instinct to take every possible meal, as it could be the last one for a very long time. As the abdomen grows, mobility weakens and every fall can be fatal. Catching prey will become more difficult and with the abdomen constantly in contact with the substrate mold-problems might show up. Spiders will probably need to molt sooner, shortening their lifetime. I feed my spiders every 10-14 days for (sub-) adults during warmer periods. This can be considered as enough (spring, summer). I feed less (around every 20 days (or less)) in colder periods (autumn, winter), depending the species. Younger bird spiders might be given prey once every week (or a little less during colder periods). Don’t feed them blindly, as you should always aim for an abdomen max. 1,5x the size of the carapace. Follow your feelings and keep track of your feeding, but beware… A recently molted tarantula has a remarkably small abdomen. This is normal and doesn’t need to be answered with more prey. Wait until body and teeth hardened up (1 week for younger spiders, 2 weeks for larger spiders) before falling in the usual pattern. Make sure there is always a filled water dish closeby.

No prey walking on the spiders web survives if the eight-legged creature was waiting for her next meal. They might, however, be lucky crossing the tarantula’s path when stuffed, in pre-molt or preparing to make a cocoon, leaving the wandering prey on itself. With a little experience you should be able to predict what’s the main reason the spider is refusing prey. Take action if environmental factors are bad for the spider, but leave the spider alone if she’s going through normal phases of life. Remove every living prey 24h after inserting them in the cage, as bird spiders are very sensitive to stress. Constant presence of unwanted prey nearby may have catastrofic consequences. In some cases you’ll see the bird spider living in perfect conditions refusing food, weakening perceptibly. They might be dehydrated, which symptomatically shows itself with loss of appetite, a lower energy level (change of behavior) and/or a shriveled abdomen (read more about treating dehydrated specimens). Make no mistake, as symptoms of dehydrated spiders and spiders in pre-molt are very similar. Your misperception might cause so much stress that your actions, trying to help, actually kill your pet.

Crickets come in plenty of shapes, sizes and weights. The smallest sizes are, along with fruit flies, very good for the smallest spiderlings. The largest sizes are a little too small for the bigger bird spiders. Offer them a few at once, 3-6, depending the spider’s size. Note that male crickets can make a lot of noise, trying to seduce the women, romantic as they are starting by sunset. They’re fast and very good jumpers, probably escaping once in while. Don’t be surprised you won’t need the cock crowing, because the cricket is keeping you awake all night.

Housing: As crickets can be cannibalistic, create a lot of surface with egg cartons and toilet rolls in a box of 40cm high.

Breeding: Females have an ovipositor between the two antennae on the abdomen. Males, however, are the ones making the chirping sounds all night long. Fill a cricket box with slightly moistened substrate and place it in the big box. Buy a few cricket boxes and put 5-10 males together with all the females in the larger box. Provide water, food, surface and temperatures between 27-32°C. Take the cricket box every 2 days adding sieved food and a moistened ball of paper towel, placing another one. Crickets will come out within 10 days. 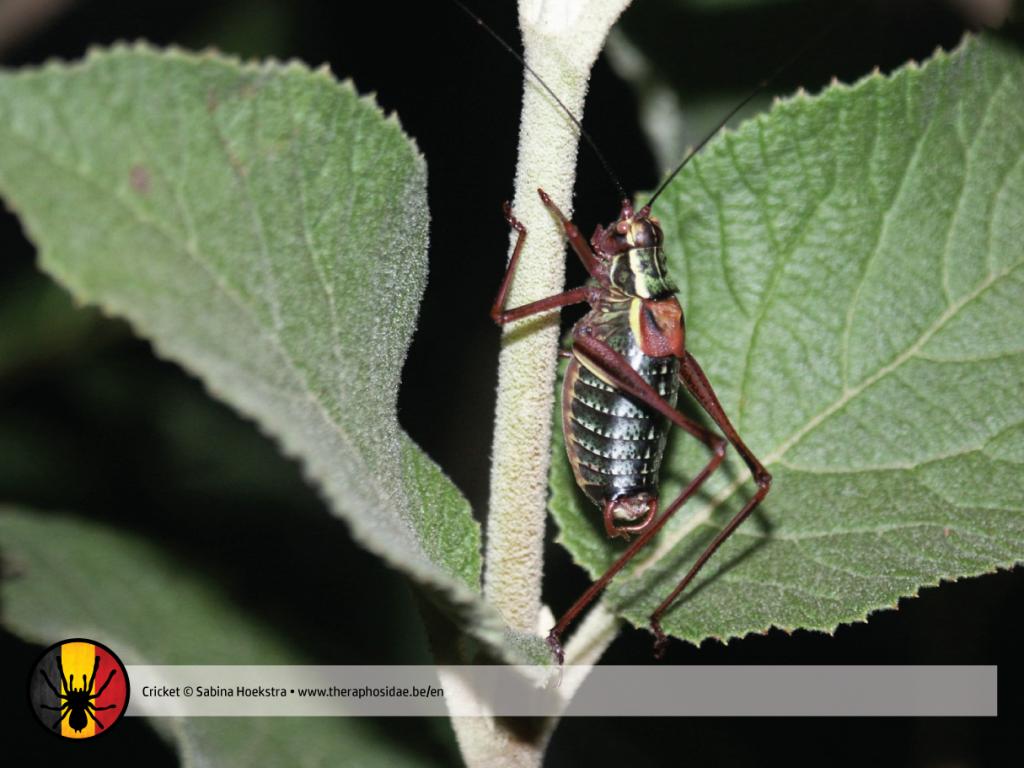 Even the smallest locusts are way too big for a lot of spiderlings. On the other hand the bigger ones are perfect prey for the bigger bird spiders. They will, however, often settle high in the terrarium, way beyond the spider’s reach. My Grammostola rosea consistently refuses locusts.

Housing: Put the locusts in a box of 40cm high and a fairly large area. Create altitude using branches, hay and other natural material.

Breeding: Provide a temperature of 27-32°C and a cricket box with slightly moistened substrate in the big box. Once the time is right the male will climb on the female’s back and stay there for several days. After a succesful mating the female will look for the cricket basket and drill her body deep inside the soil, laying 30-40 eggs. Deprive the tray (and place another one) 10 days after you’ve seen the female do this. Drop down the temperature to stop further reproduction. 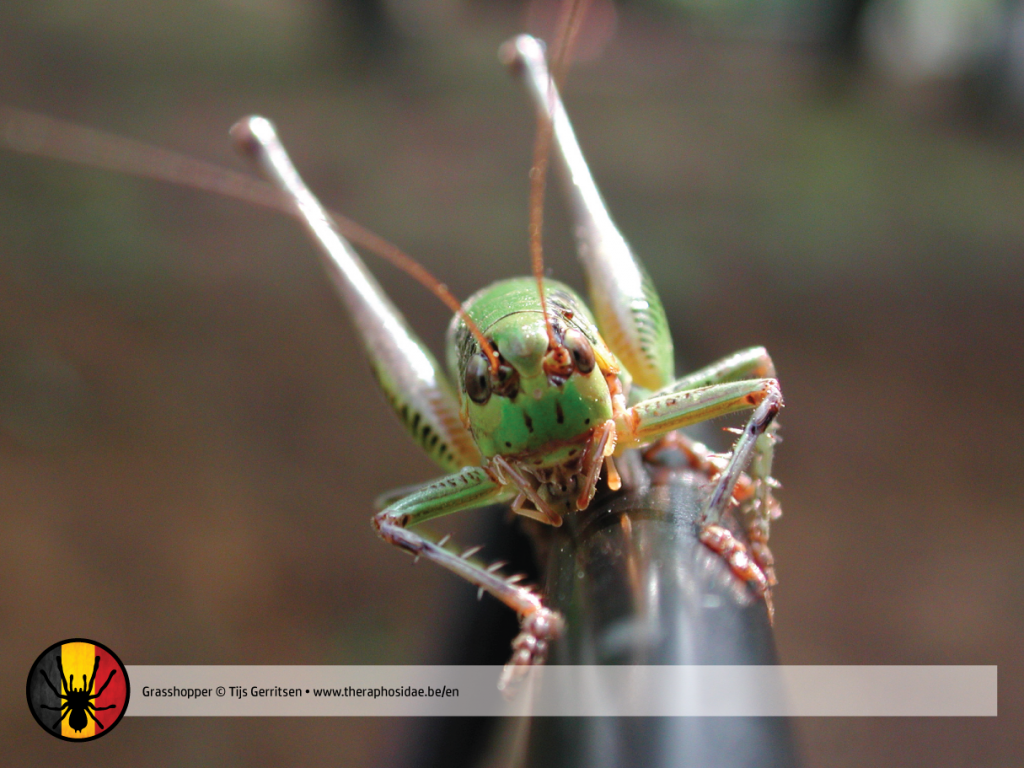 Cockroaches are a fantastic nutritional food source for bird spiders. Contrary to what you may think, these animals are very clean and the chances on adding parasites in your terraria drop down significantly. They’re tanks, built to survive in extreme conditions, and rather slow moving (except for Blatta lateralis (or Shelfordella lateralis), commonly known as red runners). They won’t escape that easy, but if they do, I hope for you it’s not a pregnant female. Make sure no mold problems occur. Mold is a severe threat to your colony.

Housing: Put the cockroaches in a box of 40cm high and a fairly large area. Add a box with substrate and create a lot of surface with egg cartons and toilet rolls. Keep day temperatures between 27-33°C and humidity mid range.

Breeding: Once the female laid the eggs, it is the male’s responsibility to fertilize the egg wire. Once done, the female will absorb the wire inside her body for 1-2 days before laying them again. Hobbyists mostly breed Blaptica dubia cockroaches. They produce more posterity at a faster rate. 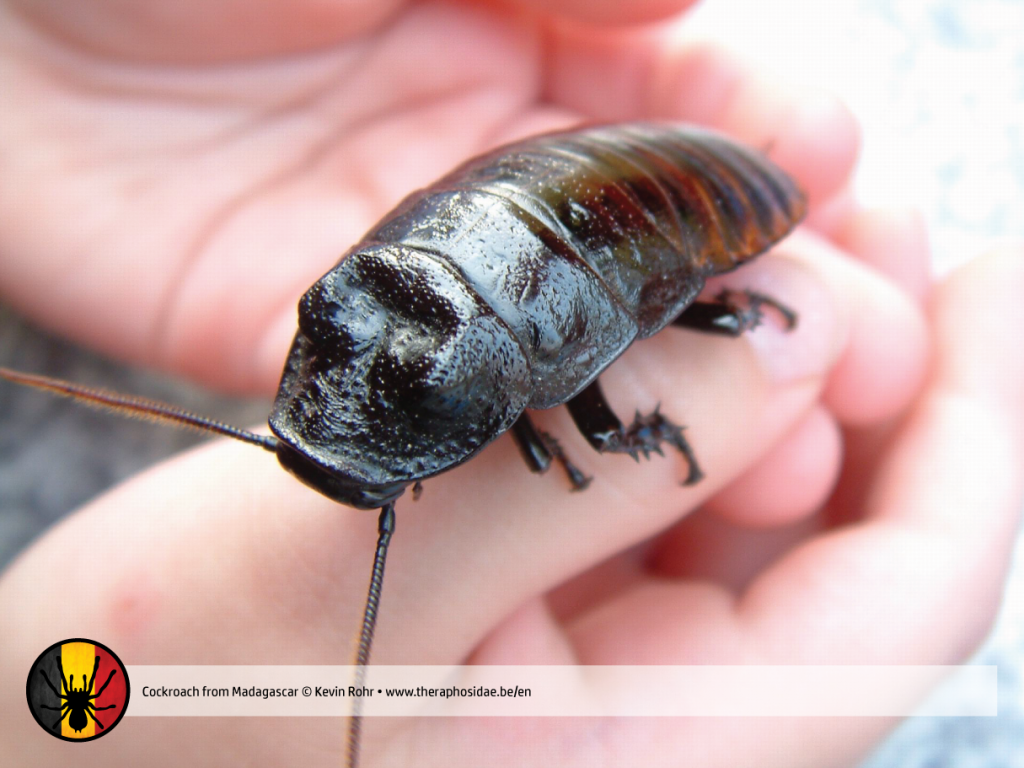 Housing: All together in a bowl with flour.

Food: Small parts of carrot. When humidity is too high inside, add a half a teaspoon of oatmeal flakes.

Those are very good for the smallest spiderlings. They are, however, very difficult to give to the spider.

Bigger animals, such as small rodents, frogs, lizards and snakes

Frogs, lizards and snakes are not being given in the hobby. Once you decide to give a small rodent to your larger species, put the spider on a strict diet afterwards. Don’t give this too often, as your spider might become obese and unhealthy.

* For more information about the nutritional value of insects, click here or here.

• Predation on amphibians by spiders (Arachnida, Araneae) in the Neotropcial region.